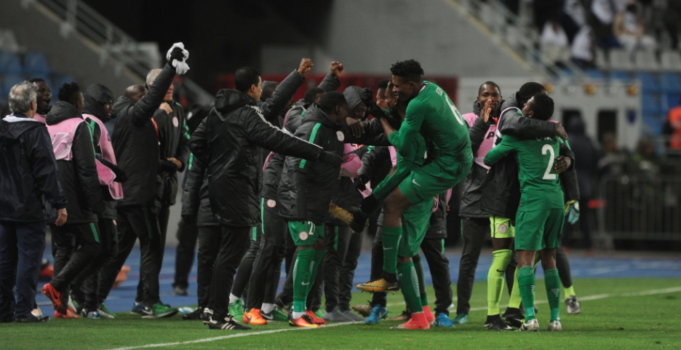 Nigeria will look to upset hosts Morocco in the 2018 African Nations Championship final, set for the Stade Mohamed V in Casablanca on Sunday evening, AOIFootball.com reports.
The Atlas Lions and the Super Eagles are bidding to become the fourth different winners of the competition, joining the honours board of DR Congo (champions in 2009 and 2016), Tunisia (2014) and Libya (2014).
Both sides berthed the final through tough semifinals on Wednesday evening: Morocco needed extra time to overcome a resilient Libya 3-1 in their North African derby in Casablanca, while Nigeria edged Sudan 1-0 in a hard-fought clash in Marrakech.
The Home-Based Super Eagles have come good on Coach Salisu Yusuf’s promise that they would reach the final of the CHAN, with Gabriel Okechukwu’s goal securing victory over Sudan.
“Our target is the trophy, nothing less,” said the Nigeria coach, who added: “Reaching the final alone will mean history for this team.
“The final of the African Nations Championship beckons and we will go out there with all that we have got.”
Head-to-head, Morocco and Nigeria have met in 12 official matches. Each side has claimed five wins, while two games have been drawn.
The teams’ most recent meeting was in the 2014 edition of the CHAN, with the Super Eagles claiming a thrilling 4-3 victory after extra time in the teams’ quarterfinal clash in Cape Town.
The West African giants came from 0-3 down to win the match.