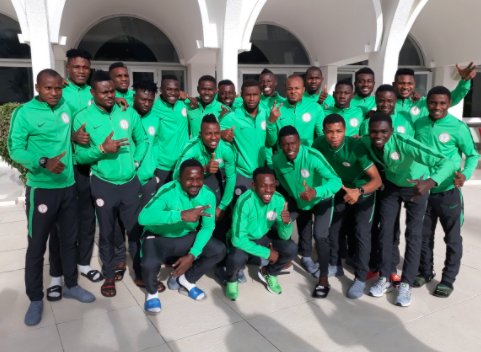 *Lagos State Government to host team
The Home-Based Super Eagles will arrive the shores of Nigeria on Tuesday after their exploits at the CHAN tournament in Morocco where they finished runners-up behind hosts and eventual winners Morocco on Sunday night.
AOIFootball.com gathered that the Nigerian delegation is due to depart Casablanca on Monday night via Air Maroc.
The players, alongside the technical crew, are expected to be checked into a hotel before being hosted by the Lagos State Governor, Akinwunmi Ambode later on Tuesday.
Governor Ambode, who watched the team live in Casablanca, praised the team’s commitment against all odds, said his government will host them to a befitting reception on their return to Nigeria.
The Salisu Yusuf- led boys achieved the country’s best feat yet at the competition by finishing 2nd, thus surpassing their 2014 feat under late Stephen Keshi where they placed third in South Africa.