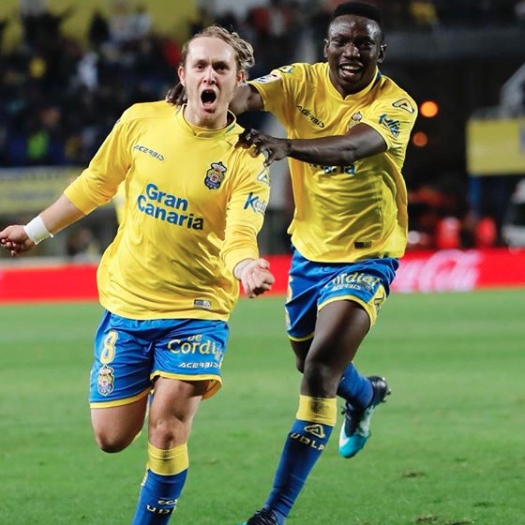 Super Eagles’ midfielder, Oghenekaro Etebo made a very impressive start to life in the Spanish La Liga as he inspired strugglers Las Palmas to a slim 1-0 victory over Malaga which had the Nigerian duo of Brown Ideye and Isaac Success in action, AOIFootball.com reports.
The quick-footed midfielder, who joined the Spanish outfit on loan from CD Feirense on transfer deadline day, started on the right-hand of the midfield in a fluid 4-3-3 formation for the hosts.
The home side were the better side as the first half wore off but were unable to break the resilient defence of Malaga with the first half ending goalless.
Las Palmas continued to threaten and came close to scoring when the impressive Etebo skipped past markers and set the ball for Johnathan Calleri with the midfielder firing wide, much to the frustration of the home fans.
Malaga on their part, which had Nigeria’s Brown Ideye upfront, were unable to fashion out a reasonable opening and brought on another Nigerian Isaac Success with 12 minutes of play remaining to try and get them the much needed win they required.
With the game almost settling in a draw, Etebo and Las Palmas had other plans when Alien Haliloviç struck in the 90th minute to earn the home team massive three points in their quest to avoid the drop.
Etebo was voted the Man of the Match with a game rating of 7.9; he completed six of his seven dribbles, won a game high 18 duels, a passing accuracy of 83%, had two interceptions and was fouled 7 times.
Ideye, who was also on for all 90 minutes, had a relatively quite game with a rating of  6.9, completing 72% of his passes and created 2 big chances.
The results boosts Las Palmas’ hope of survival, leaving them in 19th place, 3 points to safety, while Malaga remains rooted at the foot of the table with 13 points.