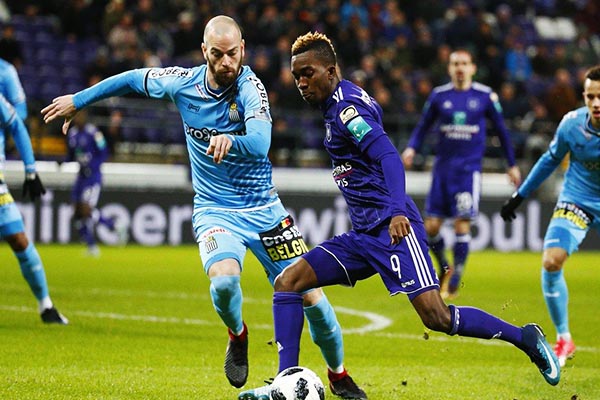 Super Eagles’ striker, Henry Onyekuru has revealed exclusively to AOIFootball.com that he will start light work on the field of play in the coming weeks after making significant progress from the knee injury he sustained last December.
The Anderlecht striker, who spoke to AOIfootball.com shortly after visiting his doctors, said the braids on his legs will soon be removed and he will be back in due course ahead of the playoffs in Belgium.
“Yeah, I saw the doctor on Tuesday. So, I am hoping he will tell me to remove the braids in my leg before the week runs out and after that, I’ll start running.
“Hopefully, in four weeks I should be back doing light work on the field of play,” Onyekuru revealed.
AOIfootball.com further gathered that the talented striker is on course to receive an award in Belgium after being nominated as the talent of the year for his stellar performance with Eupen in 2017 which eventually saw him earn a move to Everton last summer.
Onyekuru has scored 9 league goals so far for Anderlecht before the untimely injury in December halted his sensational form.

Nigerian duo named in Skybet EFL Team of the Week