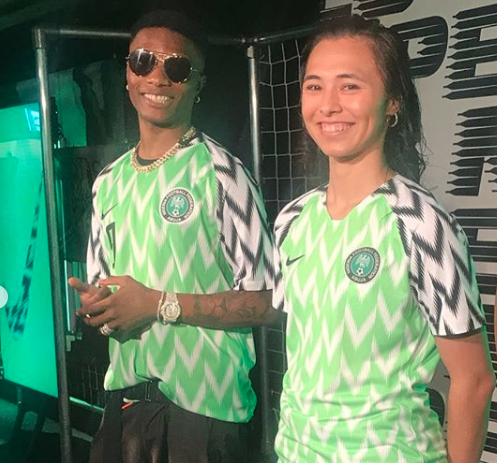 Nigeria’s young star Sophia Omotola Omidiji has declared she is finally ready to lace her boots for the Super Falcons, three years after making her debut for the U-20 team during the qualifiers to the FIFA World Cup in 2016.
The 5 ft 2 inches striker, who was part of the players used to launch the new Eagles’ kits in London, spoke to AOIFootball.com exclusively after the event, stating her readiness to wear the green and white jersey of Nigeria whilst also praising the leadership of the Glass House for bringing in a world class coach for the Super Falcons.
“Its been three years since I played with the U-20 team and I believe I have all it takes to play for the senior team and I hope I will be invited in the future.
“I was born ready, I am twenty years old and I have been playing at the highest level of football for three seasons, so I am fully ready and want to contribute my part to the success of our team,” Sophia said.
The S.B.V Excelsior forward further praised the leadership of the NFF for bringing in Thomas Dennerby as she believes his wealth of experience will be a plus to female football in the land.
“It’s absolutely amazing and definitely a milestone for women football in Nigeria. He was the former coach of Sweden who is one of the powerhouses of women football. His resume speaks well for him, so its definitely a statement of intent from the NFF and he will help develop women football I’m the country.
“His appointment will also set our expectations and standard higher which is great because the world now knows that we are here to compete globally,” she concluded.
Sophia Omotola Omidiji was born in Las Vegas Nevada to Nigerian father and American mother and has always made her intentions of playing for the Super Falcons known and might get her chance when the Falcons play France in a friendly match in April.