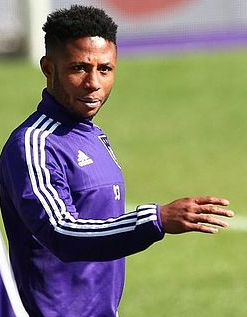 Nigeria’s Rio 2016 star, Imoh Ezekiel has arrived Las Palmas after signing a two and half-year deal with the Spanish outfit, AOIFootball.com has scooped.
The 24-year-old has been a free agent since December when he left Konyaspor.
The sensational forward comfortably operates from the wings or as the main forward in attack.
President of Lagos-based Nationwide League side, 36 Lion Football Club, Alhaji Gafar Liameed, who is also the player’s minder, stated that he strongly believes in his son’s abilities and that he will make positive headlines in the top Spanish League.
Imoh made a name for himself at Standard Liege, where he bagged a total of 35 league goals. He also played for Al Arabi and Anderlecht.