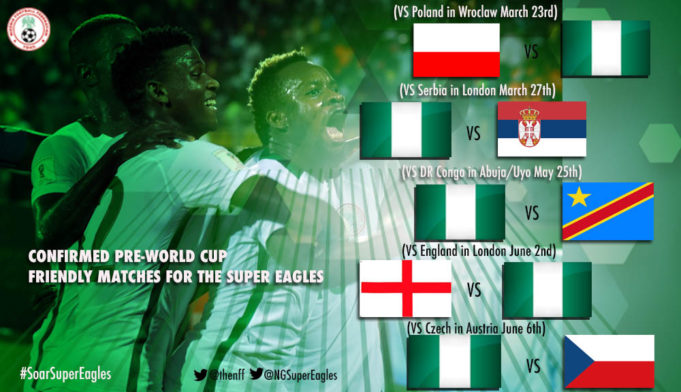 The Nigeria Football Federation (NFF) has come out to clear the air on recent reports making rounds in the media that the March 27 clash between the Super Eagles of Nigeria and Serbia might be called off due to the fact that the Serbian’s could be engaging another country on that same date, AOIFootball.com can report.

Chairman of the League Management Company, LMC and second vice president of the NFF, Shehu Dikko, while responding to questions, said the news is false and the NFF always makes the right enquiry before announcing a friendly game.

Dikko further revealed that both Nigeria and Morroco have the same match agents and both countries have a fantastic understanding, so both countries could play similar teams when it comes to friendly games.

“The good thing is that it’s NFF official match agent that is also organizing the game for Morroco. Nigeria and Morroco have a collaboration agreement at both the Federation and League Levels. So we work in coordination,” Dikko revealed.

Nigeria will take on Poland on the 23rd of March in Wroclaw before facing Serbia four days later at the Hive Stadium in London.

Battle of Uyo/ Yaoundé: Eagles must be wary of Aboubakar, says Mikel Agu