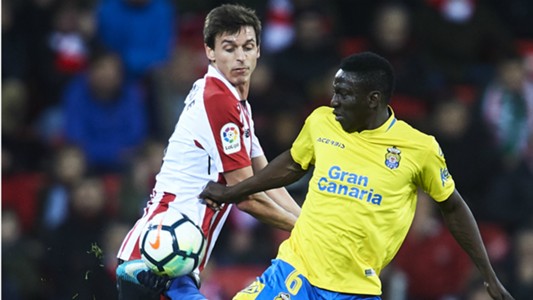 Former assistant coach of Chinese Super League club, Shanghai Shenhua, Luciano Santana Marcel, has hailed the influx of Nigerian players during the January transfer window while hoping that Eagles’ midfielder Etebo will lead Las Palmas out of the drop zone.
Santana, who spoke to AOIFootball.com in Abuja where he was one of the coaches at the LMC/LaLiga coaching clinic for youth coaches, believes the Nigerian players could also help and improve the Spanish game.
“It’s always good to have players play in the LaLiga from all the various continents, to have these kinds of players from Nigeria will surely help to improve the league.
“LaLiga is the best league in the world and having Nigeria players will improve the league further. I am happy for the players and also the club that signed them,” Santana said.
Santana also admitted he had a soft spot for strugglers Las Palmas and hopes Etebo who has been getting rave reviews since his loan move last month, can help the club escape the drop just like Kevin Prince Boateng did last season.
“Last year Boateng helped Las Palmas escape the drop and this year they have another African who I believe can help them survive and remain in the LaLiga next season. I wish Las Palmas doesn’t go down,” Santana said with a smile.
Las Palmas are currently 17th on the table with 18 points, two behind 17th placed Levante.