Home Belgian League World Cup: Echiejile is not a weak link, says Iroha
SHARE
Facebook
Twitter
Former Super Eagles’ left full back Benedict Iroha has backed under fire left back Elderson Echiejile to lead Nigeria’s defence line in Russia, whilst also insisting the former Bendel Insurance player is no weak link in the team’s defence.
The former Golden Eaglets’ assistant coach, who spoke to AOIFootball.com exclusively, said he believes Echijele’s experience will come in handy when the Super Eagles kickoff their campaign at the World Cup.
“It’s unfortunate when people refer to him (Echiejile) as the Eagles’ weakest link; funny how many have forgotten that experience can’t be bought anywhere in the world when it comes to some critical positions on the field.
“Echiejile is experienced, so I see no reason why he should not be considered ahead of the World Cup.
“I believe the coaches know what is best for the team but personally, as a player who played in that position for the national team, I will trust him ahead of other left backs currently in the national team,” Iroha said.
The former Watford defender however believes that the former Monaco man could be an inspiration to the young defenders coming in.
“It’s a good one we are having young stars coming into that position as it will offer more competition but I also believe Echiejile can help guide the younger defenders in the national team.
“He has been to the World Cup before and knows what it feels when the pressure is on the team, so I will go with Echiejile over any other left-back currently,” Iroha concluded.
A full international for Nigeria since 2009, Echiéjilé played at two Africa Cup of Nations tournaments, winning the 2013 edition, and also played at the 2010 World Cup. He however missed the last edition in Brazil after sustaining an injury in a friendly match against Greece. 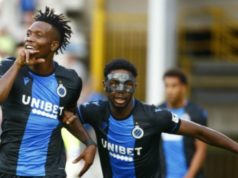