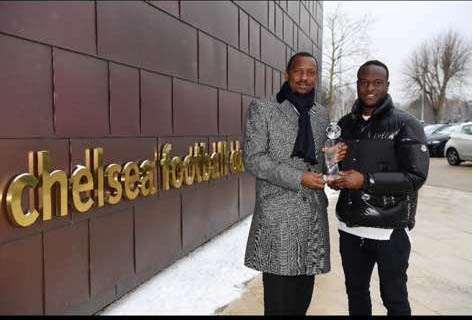 Super Eagles and Chelsea ace Victor Moses has spoken of his delight after he was presented with his AITEO-NFF Football Awards Player of the Year gong by NFF 2nd Vice President Shehu Dikko.

Dikko made the presentation to the versatile player at the Chelsea Football Club grounds in South West London during the week, and the player showed genuine excitement.

“I am simply over the moon with this award. It means that the country and the people really appreciate the little we are doing for the National Team.

“I am looking forward to doing much more for Nigeria at the FIFA World Cup finals in Russia,” said Moses, who was named winner at the Awards ceremony on 19th February.

Moses was top scorer with three goals for the Super Eagles as Nigeria made light work of a so –called ‘Group of Death’ in the African qualifying series to make sure of a trip to Russia with a match to spare.