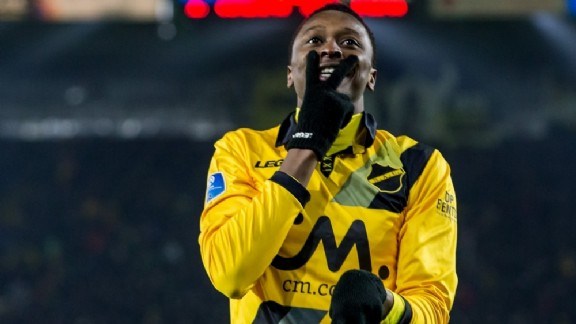 Former Dream Team striker Umar Sadiq was the hero for NEC Breda when they came from behind to stun Dutch champions Feyenoord 2-1 at home, AOIFootball.com reports.

Jens Toornstra had put the away side ahead before Thiery Ambrose equalized after 23 minutes to draw the hosts level.

Five minutes into the second half, Umar stole the show when he went past goalkeeper Brad Jones before the former Liverpool shot-stopper brought down the Nigerian.

Umar duly stepped up and converted the penalty to hand his side a morale-boosting win and secured a much needed three points for the host.

The on-loan Roma attacker has now scored 3 goals in five outings and was substituted in the 84th minute to a standing ovation from the home fans.

Umar had a game rating of 7.8, winning 9 duels and was fouled four times in the match.