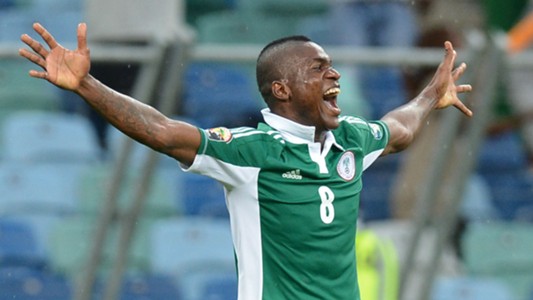 Malaga FC of Spain striker Brown Aide Ideye has not ruled out the possibility of playing for the Super Eagles in the future, saying he is ready to prove his worth and fight for the opportunity to represent Nigeria at the World Cup if given the chance, reports AOIFootball.com.
Ideye, who was instrumental to the Super Eagles’ 2013 AFCON triumph, after forming a solid partnership with Emmanuel Emenike, said even if he is overlooked for the upcoming friendlies against Poland and Serbia, he will continue to give his best at club level to improve his chances of donning the green and white jersey again.
“It’s not too difficult to understand why I was out of the national team fold for a while because of my situation in China last year. But I am here now in Malaga and I believe I can fight and lay a claim for a recall to the Super Eagles’ fold.
“Maybe the upcoming friendlies are too soon but I am keeping my options open to the possibility of anything happening,” Ideye said.
The former West Brom striker, however, added that his eyes are set on making the Eagles’ preliminary squad for the World Cup, insisting it will provide him an opportunity to prove all doubters wrong.
“I am working so hard on and off the pitch to try my best and be among the maybe 30-man preliminary list for the World Cup, then I will prove myself to the coaches and all Nigerians that I deserve a place in the national team setup.
“It won’t be easy but I am fully prepared for the task ahead,” Ideye concluded.
Ideye last featured for Nigeria in 2016 and will be looking to add to his current 28 caps as the World Cup draws closer.

AFCON game against Algeria remains my best for Nigeria- Collins