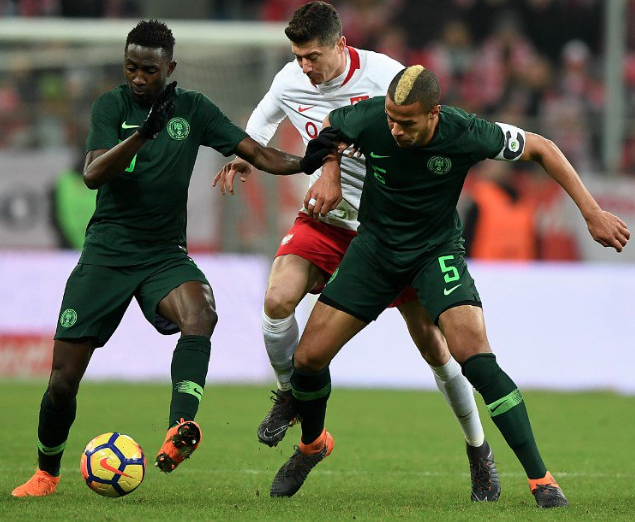 A Victor Moses’ 61st-minute penalty capped off a resilient performance for the Super Eagles of Nigeria who flew past their enterprising hosts, Poland 1-0 at the Municipal Stadium in Wroclaw on Friday.

In the absence of captain John Obi Mikel, Joel Obi, given his first Super Eagles cap since his last outing in a friendly against Scotland in May 2014, partnered Wilfred Ndidi at the heart of midfield while Brian Idowu got the nod ahead of Elderson Echiejile at the left-back.

Nigeria dominated the early exchanges but were less enterprising with their approaches in the final third. But in the eighth minute, the woodwork denied the hosts a lead after Lewandowski connected to a teasing Rafal Kurzawa low cross.

The game soon took on a physical approach, with the Poles looking to physical for their African counterparts, but it was Adam Nawalka who was felt the pressure the most after midfielder Karol Linetty went off injured and was replaced by Jacek Goralski in the 17th minute.

The Super Eagles tried their bit to threaten their hosts after Moses picked himself up to curl a free kick past Lukasz Fabianski’s post in the 34th minute.

The game sparked to life in the closing stages of the first half, with Poland threatening with a myriad of set pieces.

Kurzawa’s curling free-kick evaded the head of Grzegorz Krychowiak and minutes later the West Bromwich Albion midfielder thought he had opened the scoring but referee Michael Oliver was convinced by Troost-Ekong’s goal-line clearance. Uzoho also parried Lewandowski’s low freekick, which was the last chance before the interval.

Uzoho overcame his jittery start to the encounter and got down well to deny Lewandowski’s point-blank effort in the 51st minute to keep the hosts at bay.

Five minutes later, the Super Eagles, against the run of play, got the curtain raiser through Moses via the penalty spot after the Chelsea wideman was upended by Marcin Kaminski. The 26-year-old rolled the resulting set-piece past substitute goalkeeper Bartosz Blalkowski.

Lewandowski’s evening was brought to a halt six minutes after the hour mark, with Jakub Swierczok replacing the Bayern Munich danger man.

Napoli hotshot Arkadiusz Milik was also introduced to pile more pressure on the resilient Eagles’ defence but Rohr’s men held on for a remarkable victory.

Nigeria will hope to continue with their positive World Cup preparations when they face Serbia at the Hive Stadium on Tuesday, March 27. 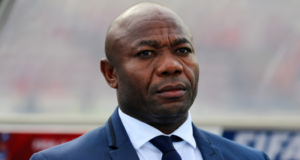