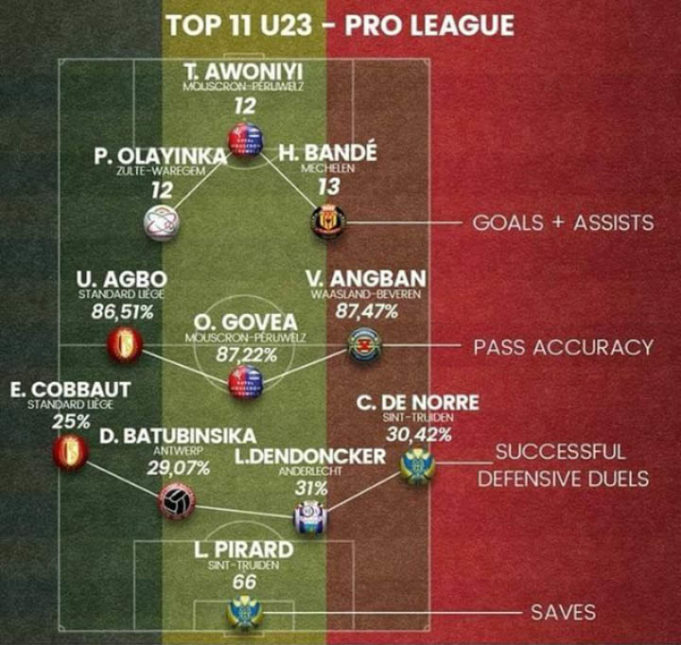 Former U-17 World Cup-winning striker, Taiwo Awoniyi, has been named as one of the eleven best players under the age of 23 in the just concluded Belgium league regular season after a string of impressive displays with Royal Excel Mouscron, AOIFootball.com reports.

The on-loan Liverpool attacker, who scored 7 goals with 5 assists, leads the attack in a 4-3-3 formation which also includes two Nigerians Uche Agbo of Standard Liege and Peter Olayinka of Zulte Waregem.

Olayinka, on his part, joins the front three after scoring 8 goals in the regular season while also adding 4 assists to his name in 23 games played, starting in all of the games he featured in this season.

While Agbo who was part of Nigeria’s friendly match against Poland and Serbia, he forms a midfielder trio after impressing for Standard Liege that made it into the Championship playoff round.

Uche Agbo scored one goal all season, had an impressive passing accuracy of 87% while also averaging well over 80% of passes completion per game.

Agbo remains part of Eagles’ Coach, Gernot Rohr’s World Cup plan while Awoniyi on the other hand must continue to work hard if he’s to stand any chance of been a part of the World Cup party to Russia later in June.

Abiola Shodiya - May 24, 2017
ALL CATEGORIES
SOUNDCLOUD