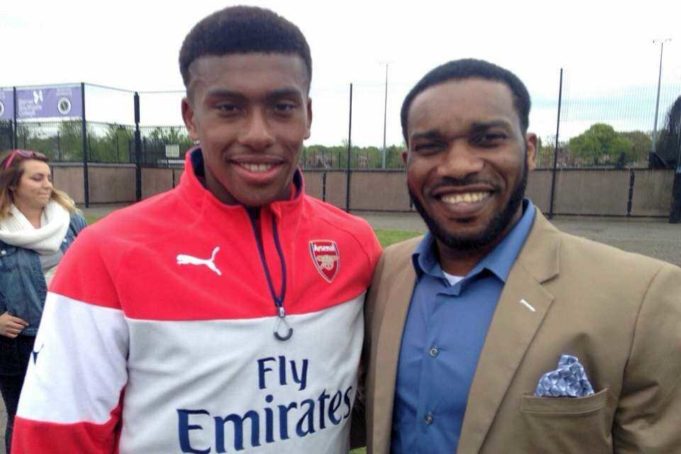 Despite suffering defeat on a cold night in Bernet against Serbia on Tuesday, Alex Iwobi seems to have caught the eye of a Top UK tabloid with his role in the midfield, which said that he could be a future playmaker for the Nigeria national team, AOIFootball.com reports.

Though unable to fire Nigeria to victory at The Hive, it was clear the international break has freed Iwobi to show what he can do rather than what he feels he ought to for the good of the team.

There is an obvious reason for that. Nigeria Head Coach Gernot Rohr may have an exciting young squad to take to Russia but he hardly has creators. Iwobi is perhaps the nearest the Super Eagles have to a playmaker, and certainly looked like their best hope of a goal as they laboured against a disciplined Serbia.

Twice in the first half, the 21-year-old went close, a fine touch and turn in the box teeing him up for a goal-bound volley that was well blocked by Aleksandar Kolarov.

Even in a low-intensity second period, Iwobi shone as his close control on the right flank brought Nigeria out of trouble and freed his teammates to counter.

It was a far cry from his displays at Arsenal in recent months, where the player who was man of the match in a 3-0 win over Chelsea in September 2016 looks inhibited, even reluctant, to do much beyond feeding Ozil and tracking runners.

“With us, all the time he’s very good, already in Poland [where Nigeria won 1-0] and he was fantastic tonight,” Rohr told Standard Sport.

“Perhaps sometimes [he did] a little too much individually, he wanted to make a show. We prefer collective football.

“But when he can eliminate his opponent it’s very good [for us]. He’s with us all the time in confidence. He’s free when he has the ball.

“I don’t know what the tactical options of Arsene Wenger are when he’s with Arsenal, but with us, he’s free offensively and he can show all his qualities,” Gernot Rohr said.

For Iwobi this was a reminder of what made him such an exhilarating addition to the Arsenal side two years ago. A willingness to engage opponents, this short, sharp passing and direct running: all traits of the youngster’s bright start but now all too rarely been spotted.

Iwobi could, however, feel the void left by his uncle and former Eagles’ captain Jay-Jay Okocha as Nigeria continues to search for a perfect number 10 heading into the World Cup in Russia.