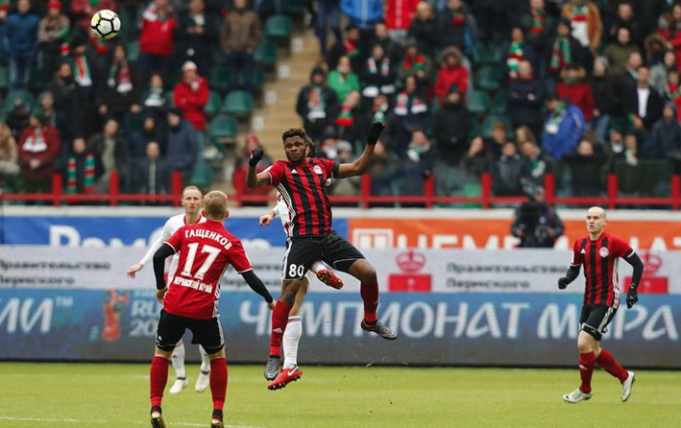 Super Eagles’ striker, Aaron Olanere Samuel scored his first goal for Amkar perm when they came from behind to stun league leaders, Lokomotiv Moscow 2-1 in the Russian league on Saturday, AOIFootball.com reports.

It was the away side who drew first blood in the 16th minute when Manuel Fernandes converted from twelve yards to put Lokomotiv one goal up, heading into the break.

The second half resumed with the home side beaming with more confidence and deservedly got their equalizer three minutes after the restart when Aaron Samuel stepped up and converted from the penalty spot to draw Amkar Perm level.

With one hour gone, Samuel completed his brace when he scored from a Peter Zanev assist to hand his side all three points and push them out of the relegation.

Samuel was however withdrawn after 65 minutes but was voted man of the match with a game rating of 8.6, completing 86.7% of his passes and winning 5 duels.

Samuel was not the only Nigerian in action for the home team as Brian Idowu and Fegor Ogude were also on for the entire duration of the match and had a game rating of 7.1 and 7.2, respectively.

The result leaves Amkar Perm on 13th position with 25 points from 23 games.