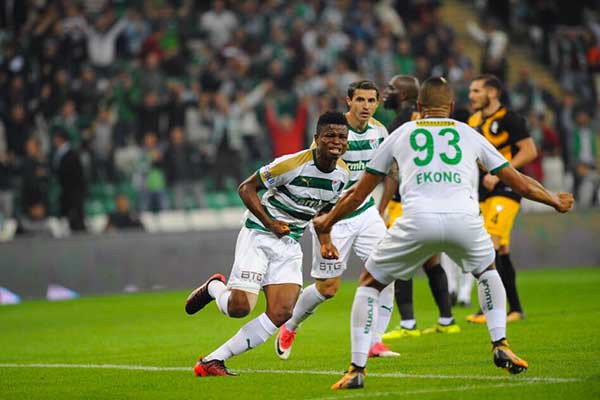 Super Eagles’ midfielder, Mikel Ndubuisi Agu is set to make his 20thappearance for Turkish club, Bursaspor when they file out against Kasimpasa on Sunday afternoon in a mid-table clash that will showcase no fewer than five Super Eagles’ World Cup hopefuls, AOIFootball.com reports.

The on-loan Porto midfielder, who has been impressive for the Paul Le Guen-tutored side this season, has made 20 appearances starting in 19 of those matches. He will however not be the only Nigerian on parade as the likes of Abdullahi Shehu and Troost-Ekong (both for Bursaspor), while defender Kenneth Omeruo and attacker Samuel Eduok (both of Kasimpasa) will be their guest at the Bursa Büyüksehir Stadium.

The clash will be a massive one for Agu and Bursaspor as they hope to ease the pressure off under fire Paul Le Guen who has managed just two wins in 10 outings for the Green and White Army.

Bursaspor is currently 12th on the log with 33 points but could leapfrog their visitors with a win as Kasimpasa currently occupy the 10th position with 34 points from the same number of games played.

The game should be of interest to Eagles’ manager Gernot Rohr, especially with the possibility of Abdullahi and Agu continuing their midfield partnership.

Neymar has same skills as me – Okocha