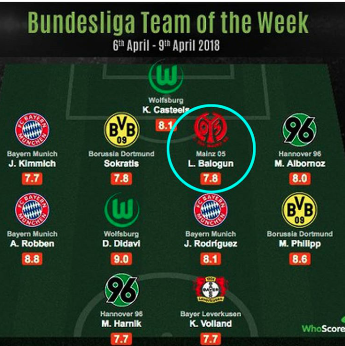 Super Eagles’ defender, Leon Balogun’s impressive display over the weekend against FC Kiln Haa didn’t go unnoticed as the Mainz 05 defender, was named in the German Bundesliga Team of the Week, AOIffotball.com reports.

Balogun, who was making his 13th appearance of the season, was on for the entire match duration and helped his side to a 1-1 draw away from home.

Balogun had a game rating of 7.8, which puts him amongst the best-rated players of the weekend in a 4-4-2 formation that also includes the likes of Arjen Robben, James Rodriguez, and Kelvin Holland.

The Eagles’ defender made 7 clearances, 5 interceptions, 4 tackles, whilst also winning 11 duels and completing 80% of his passes.