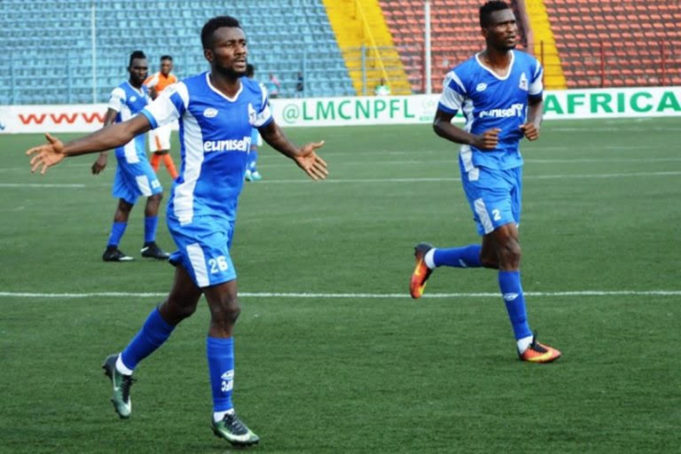 Rivers United Emeka Ogbugh has emerged the first player to win the VAT Wonder Goal award in three seasons following his polling of over 48 percent of the votes cast by fans for the Match Day 15 shortlisted goals.

Rangers International’s Ajani Ibrahim, Lobi Stars Umar Zango, Sunshine Stars Sunday Emmanuel and Junior Lokosa of Kano Pillars were the other contestants for the weekly award which attracted 327 votes. The polls opened on Monday and closed at midnight on Thursday.

Ogbugh polled a total of 170 votes or 51.9 percent for his goal against Heartland FC of Owerri in Rivers United’s 2-0 defeat of the club where he began his professional football career in 2012.

Ogbugh first won the award while playing for Heartland in the 2015/16 season and won his second last season with Rivers United.

A footage of the goal showed Ogbugh receiving a pass five minutes into the second half, halfway into the opponent’s side, and in a deft move, swerved away from two defenders to unleash a rasping shot that beat goalkeeper Japhet Opubo.

The player who studied at the Imo State University while playing for Heartland told Journalists after the match that he refused to celebrate the goal because of his emotional attachment to the Owerri-based club.

“I got my break in professional football from this club (Heartland) but as a Rivers United player, I had a duty to help my club which I did by scoring the goal”, Ogbugh was quoted to have said.

He will be presented the ceremonial award plaque during the Rivers United versus Kwara United match day 17 fixture at the Yakubu Gowon Stadium in Port Harcourt on Sunday. The prize money of N150,000 will be shared equally between the player and a charity he will nominate.

The VAT Wonder Goal was introduced in the Nigeria Professional Football League (NPFL) by the League Management Company (LMC) and is supported by the Federal Inland Revenue Services (FIRS) to strengthen club and community engagement and also create awareness for tax payment within the football community.