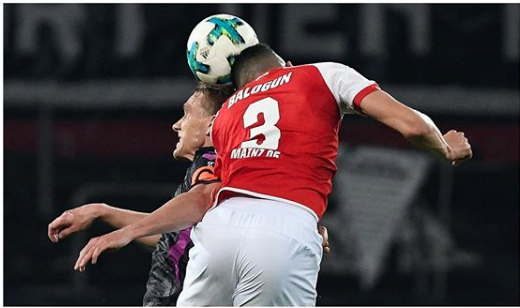 Super Eagles’ defender, Leon Balogun was at his brilliant best for the second successive Bundesliga match as he inspired his team to a 2-0 win over Freiburg on Monday night, a result that sees Mainz 05 momentarily climb out of the relegation zone, AOIFootball.com reports.

Balogun, who was making his 14th league start of the season, was at the heart of his side’s defence all through the match, as a brace from Pablo Dey Blasis in both halves of the match ensured the home team leapfrogged Freiburg to 15th position with just goal difference separating both sides.

The Eagles’ defender had a game rating of 7.4, making 5 clearances, 1 blocked shot and 2 tackles. He also won a game-high of 10 duels and also completed 85% of his passes.

After the game, a happy Balogun urged his teammates to remain focused as they aim to completely beat the drop.

“Well done lads. Great fight from the whole team & amazing support from the fans. Let’s enjoy the moment and take a small breather before we get back to work again. Nothing gained yet – it ain’t over till it’s over,” Balogun said.