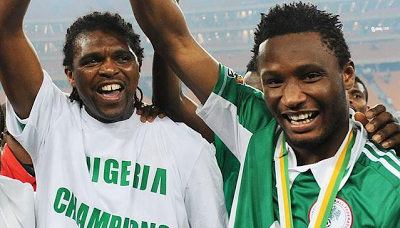 Former Super Eagles’ captain, Nwankwo Kanu believes former Chelsea of England star and current captain of the Super Eagles, John Obi Mikel can be the solution to the team’s lack of creativity if properly given the freedom to play in the role.

The former African Footballer of the Year, who said this to AOIFootball.com in an exclusive interview, further added that he is confident the Eagles’ attack will be potent at the World Cup in Russia.

“I believe we don’t really need to go too far for a solution for a player who can provide creativity to the team. I think a player like Mikel Obi can perfectly play in that position because he has shown in recent past that he can deliver when it matters most.

“Look at our qualifiers, especially against Cameroon and Algeria, he brought his attacking prowess to play and ensured the team was able to gain maximum points. I know a bit about him from our time with the national team; if given the right support from the back, he will definitely deliver upfront,” Kanu said.

The former Arsenal star further expressed confidence in the ability of the Eagles’ frontline to deliver at World Cup, urging Nigerians not to judge them on the last two friendly matches played against Poland and Serbia.