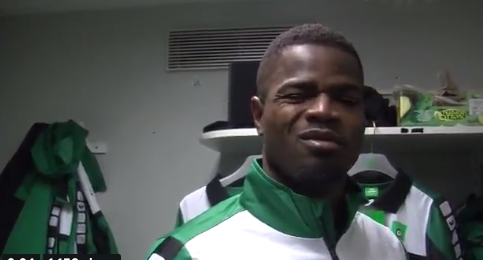 Super Eagles’ defender, Elderson Echiejile put up a superb display as his Belgian side, Cercle Brugge faced lower division side KRC Herelbeke in a friendly clash even as the team celebrates their promotion to the elite division this weekend, AOIFootball.com reports.

Echiejile, who is on loan from AS Monaco, featured all 90 minutes and was one of the stars of the game as he won two aerial balls, had 84 percent pass accuracy and won three important tackles in the encounter.

An excited Echiejile told AOIFootball.com from his base in Belgium that it was a good test game for the team. “It was a good feeling and the game was exciting. I have been working hard and I hope to continue with my mind fully on the World Cup as the season wraps up,” he said.

Cercle Brugge will parade their trophy this weekend after sealing their promotion to the elite division last month. Cercle Brugge tutored by Coach Franky Vercauteren were winners of the First Division B table with 27 points from 14 games.