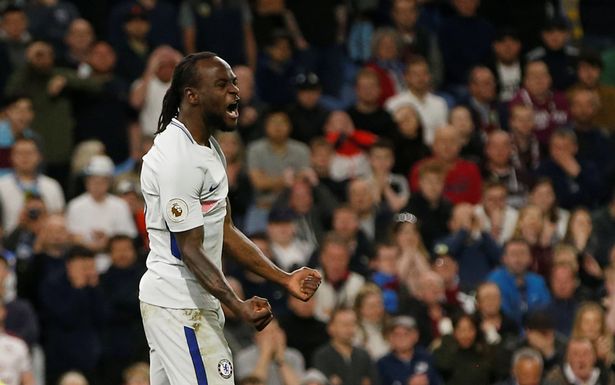 Super Eagles’ attacker, Victor Moses was the star for Chelsea when he struck a 69-minute winner to help the former EPL champions to a hard-fought 2-1 win away at Burnley, thus keeping their slim top four hopes alive, AOIFootball.com reports.
Chelsea opened the scoring in unlikely fashion in the 20th minute when Victor Moses crossed from the right and Pope failed to punch the ball away, instead palming the ball onto the knee and then hand of his own defender Long and seeing it rebound into the net.
The goalkeeper was at fault for the goal, but he twice denied the wasteful Alvaro Morata in the first half, clearing an early shot across goal with his legs before rushing off his line to stop the striker getting a shot away.
Chelsea were even more frustrated in the 64th minute when Burnley equalized in unfortunate circumstances. Johann Berg Gudmundsson struck a low shot from 20 yards which was heading wide, but it took a fierce deflection off Barnes, wrong-footing Thibaut Courtois and finding its way into the far corner.
But the away side restored their lead five minutes later when Emerson’s left-wing cross found Moses unmarked eight yards from goal and he drilled a low shot past Pope at his near post.
Moses, who was on for the entire match duration, was adjudged the man of the match with a game rating of 8.4, whilst the result keeps Chelsea within touching distance of Spurs who currently occupy the 4th spot with 4 games left in the league.

Video: See How Black Stars players ease off at AFCON ahead of crunch matches