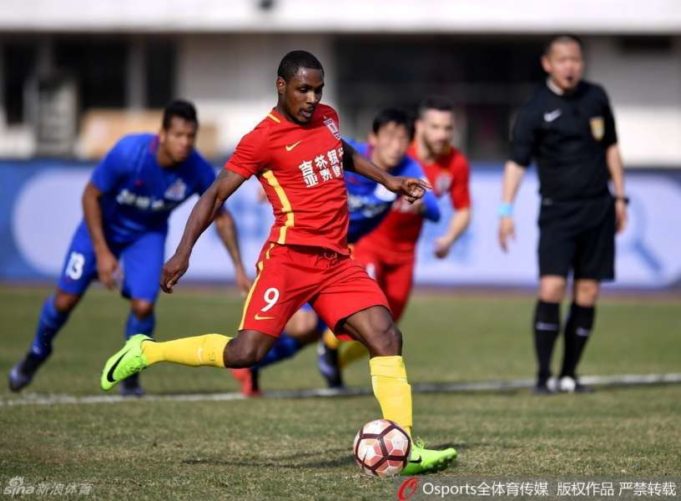 It was yet another fantastic weekend for Nigerian players across the globe with Ighalo equaling the record of most goals scored in a single match in the Chinese League, whilst the likes of Ahmed Musa and Anthony Nwakeame also made headlines for the right reasons.

There was also a dream debut for former Rangers star, Chisom Egbuchulam, with Simy Nwankwo also making a late push for a chance to be in Russia.

AOIFootball.com takes you through their performances with plenty to smile about for most of  Nigerian players in Europe.

Victor Moses: The Eagles’ winger was at his brilliant best as the Blues booked their second successive FA Cup final after a 2-0 win over Southampton to set up a final showdown against Manchester United at Wembley next month.

Ola Aina: The Eagles’ left-back was replaced by another Nigerian Fikayo Tomori when Hull City came from 3-1 down to play out a 5-5 draw with Bristol City.

Yusuf Otubanjo: The winger was confided to the bench as he watched his team SCR Altach fall 3-1 away at RB Salzburg.

Abdul Ajagun and Peter Olayinka: Both players were on from start to finish but it was Olayinka who smiled home as his team Zulte Waregem made light of KV Kortrijk 2-0 in the playoffs round.

Chuba Akpom: The on-loan Arsenal player was on from start to finish but was unable to prevent Sint-Truidense from going down 2-3 at home to KAS Eupen.

Moses Simon, Samuel Kalu and Anderson Esiti: Samuel Kalu saw 60 minutes of action for KAA Gent as they lost 2-1 away at RCS Charleroi.

Anderson Esiti and Moses Simon were both not listed for the match.

Joseph Akpala: Akpala was on for the entire match duration as KV Oostende recovered from two goals down to draw 2-2 at home to KFCO Beerschot Wilrijk.

Odion Ighalo: The striker was in a land of his own over the weekend as he scored four times for Changchun Yatai in their 5-2 thumping of Guizhou Zhicheng

Mikel Obi: Birthday boy, Obi Mikel was in action for all 90 minutes as Tianjin Teda became the first team this season to deny Shanghai SIPG of all three points as they played out a 1-1 draw away from home.

John Owoeri: The former junior international scored his third goal of the season for Shanghai Shenxin as they fell 2-1 at home to Meizhou Hakka in the China League.

Frank Onyeka and Paul Omuachu: 20-year-old Onyeka came off the bench in the closing stages and got the equaliser for Midtjylland with the last kick of the game as they forced AaB to al 3-3 draw away from home.

Paul Onuachu was also introduced in the 72nd minute.

Chidozie Awaziem: The defender was on from start to finish as Nantes played out a 1-1 draw at home to Stade Rennais.

Anthony Ujah and Leon Balogun: Ujah saw 30 minutes of action for Maiz while Balogun was not listed at all as Mainz remained within the relegation zone after they lost 2-0 away at Augsburg.

Simy Nwankwo: The 25-year old attacker continued to lay claim for a national team invite as he scored his second goal in the space of four days when Crotone came from behind to beat Udinese 2-1.

John Ogu and Anthony Nwakaeme: Anthony Nwakaeme showed signs of a full recovery from his injury as he netted a brace in Hapoel Be’er Sheva’s 5-1 bashing of Maccabi Netanya. John Ogu was also on for the entire match duration as     Be’er Sheva edged closer to another league title.

David Babajide and Anthony Ideki: Babajide put up a man of the match display as he helped setup Torbjon Kallevag to score Haugesund’s only goal as they beat Stromsgodest 1-0.

Anthony Ideki was on the bench for the entire match duration.

Chidera Ejuke: The midfielder was on from start to finish as Valerenga IF played out a goalless draw at home to Molde FK.

Afeez Aremu: The midfielder was on for the entire duration but could not prevent IK Start from going down 2-0 away at Rosenborg BK.

Matthew Ifeanyi, Charles Ezeh and Moses Ebiye: Former junior international Matthew Ifeanyi was on from start to finish but could not prevent Lillestrom from losing 1-0 at home to Ranheim IL.

Charles Ezeh and Moses Ebiye were both confined to the bench for the home team.

Ahmed Musa: The speed demon was again the star of the match as he notched up two brilliant goals to rescue CSKA Moscow who came from behind to defeat FK Krasnodar 2-1. 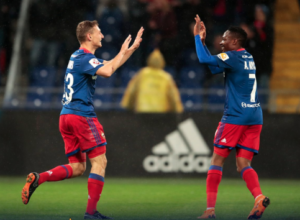 Sylvester Igboun: The attacker was on for the entire match duration as FK UFA forced Lokomotiv Moscow to a goalless draw.

Aaron Samuel, Brian Idowu and Fegor Ogude: Idowu was on for all 90 minutes while Ogude and Samuel were both not listed by Amkar as they beat FK Tosno 2-0 away from home.

Hillary Gong Chukwah, Philip Azango and Rabiu Ibrahim: Former Super Eagles’ midfielder Rabiu Ibrahim scored his first goal of the season in Slovan Bratislava’s 3-1 win over AS Trencin which had both Azango and Hillary on their ranks.

Rabiu was withdrawn after 78 minutes, whilst Azango and Hillary were on from start to finish.

Oghenekaro Etebo and Imoh Eziekel: Etebo and Eziekel both started for Las Palmas as they suffered a demoralizing 4-0 loss at home to Deportivo Alaves, a result that confirms their relegation to LaLiga 2.

Brown Ideye and Isaac Success: Brown Ideye came off the bench after 78 minutes whilst compatriot Isaac Success was rooted to the bench for the entire match duration as Malaga’s 2-0 win against Real Sociedad was inconsequential as they were relegated to the second tier of Spanish football.

Chima Akas and Gbenga Arokoyo: Akas started his fifth consecutive game for Kalmar, while Arokoyo was confined to the bench as they edged out Trelleborgs 1-0 away from home.

Chisom Egbuchulam: It was a dream 30 minutes for former Rangers of Enugu star Egbuchulam who came off the bench after the hour mark to score a brace for Falkenbergs FF as the beat IK Frej 3-1 in the Swedish Second Division.

Kenneth Omeruo and Samuel Eduok: Omeruo was on from start to finish while Eduok was introduced in the 77th minute as Kasimpasa lost 2-0 away to Konyaspor.

William Troost Ekong, Mikel Agu and Abdullahi Shehu: Versatile defender Shehu Abdullahi was on from start to finish as Bursaspor earned their first win since the departure of former coach Le Guen as they trashed bottom placed Karabukspor 4-1.

Agu and Ekong were both confined to the bench.

Aminu Umar: The former dream star came off the bench after 72 minutes to inspire Osmanlispor as he setup two goals in their 3-0 bashing of Genclerbirligi.

Olanrewaju Kayode: The on-loan Manchester City striker started his first league match but was unable to get on the score sheet as Shakhter Doetsk brushed aside Vorskla Poltava 4-2.

Francisca Ordega: The Super Falcons’ forward scored her second goal of the season as Washington Spirits drew 1-1 away at Portland Thorns.

Ideye to start as Malaga hope to upset Real Madrid