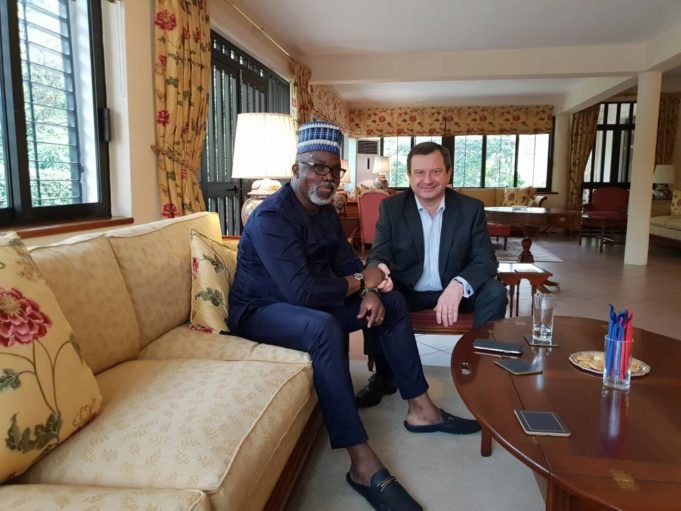 President of the Nigeria Football Federation, Mr. Amaju Melvin Pinnick, has assured football- loving fans and indeed fans of the Three Lions of England that the friendly between Nigeria and England is more than just a game.
Pinnick made this assertion when he visited the British High Commissioner to Nigeria, alongside his 2nd vice president as both nations intensify preparations for the big clash.
The NFF chief informed Arkwright that the Nigerian High Commission in the United Kingdom is also involved in efforts to ensure the match is a huge success, coming less than two weeks before the opening match of the Russia 2018 FIFA World Cup finals.
“We appreciate the excellent cordial relations between our two countries and that is one of the reasons this is more than just a match. It is coming up only two weeks before Nigeria’s first match at the FIFA World Cup, and 16 days before England’s first match in Russia.

“The two countries have so much in common. We believe this match will go a long way in strengthening England-Nigeria relations in several areas,” Pinnick said.

Similarly, the British High Commissioner Mr. Arkwright posited that his nation will also approach the game with all seriousness.
“Let me also assure you that England is taking this match seriously. It is more than just a game; it is a big preparatory game towards the FIFA World Cup. More than that, the historical ties between our two countries are there to be considered, so it will also serve to strengthen and enhance relations and good collaboration between our countries,” said Arkwright.
The Super Eagles and the Three Lions will lock horns at the Wembley Stadium on Saturday, 2nd June, in what will be the Eagles’ penultimate friendly match before flying to the World Cup finals in Russia.