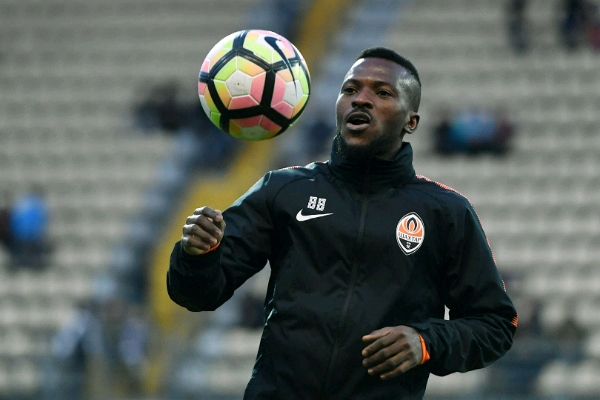 Super Eagles’ striker Kayode Olanrewaju has expressed disappointment after being given a one-match ban on appeal when Shakhtar Donetsk took on rivals Dynamo Kiev in the league last month.
The Control and Disciplinary Committee of the Football Federation of Ukraine announced its decision to ban Kayode at a meeting on May 2 after he was not shown a card for striking the head of Dynamo Kiev’s number 30 Artem Shabanov in the fourth minute of stoppage time.
The capital outfit sent a complaint letter to the Ukrainian Federation, requesting that Kayode should be banned for five matches, however after his side’s appeal, the ban was reduced to just one game.
An Unhappy Kayode told AOIFootball.com exclusively that he was obviously disappointed in the decision, promised to get back stronger for his club in the coming games.
“I’m obviously disappointed because I don’t know why they said I elbowed the guy; he elbowed me and I just pushed him in retaliation and the referee did not see anything wrong in it, but it has happened and I have to just move on.
“I will only miss this weekend’s game against Zorya because we appealed the decision, but I know I will return better and won’t allow this little setback to hinder my progress,” Kayode concluded.
The on-loan Manchester City striker has had a strong start to his career at the Ukrainian champions as he has recorded three goals from five matches in all competitions.