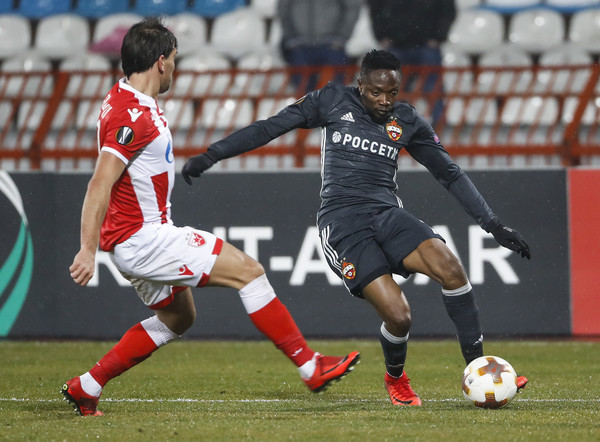 It was yet another fantastic weekend for Nigerian players abroad, with Ahmed Musa hitting another brace for CSKA Moscow, while Iwobi and Moses also impressed for their various clubs in the English Premier League.

AOIFootball.com takes you through Nigerian players abroad and their performances over the weekend.

Victor Moses: The Eagles’ winger was provider for Olivier Giroud as the Frenchman scored the only goal to give the Blues victory over perennial rivals, Liverpool at Stamford Bridge.

Alex Iwobi: The Gunners’ attacker was on the scoresheet in an emotional match at the Emirates, as Arsenal beat Burnley 5-0 to give departing manager, Arsene Wenger a befitting home send forth.

Kelechi Iheanacho: The attacker saw 30 minutes of action as he came off the bench in Leicester City 2-0 loss at home to West Ham United

Ola Aina: The Eagles’ left-back was introduced after 8 minutes for injured Ondrej Mazuch as Hull City ended the season with a 1-1 draw away at Brentford.

Hope Akpan: The Nigerian star was on target for the second consecutive match when he grabbed the equalizer for Preston in their 2-1 at home to Burton Albion.

Peter Olayinka and Abdul Ajagun: Olayinka netted his 10th league goal of the season when he grabbed the winner in Zulte Waregem’s 2-1 win away at KV Kortrijk. Ajagu came on in the 48th minute but could not help his side to victory.

Joseph Akpala: He scored his 9th goal of the season as KV Oostende beat KFCO Beerschot Wilrijk 2-0 away from home.

Henry Onyekuru and Emmanuel Dennis: Onyekuru returned to the bench for the first time in four months as Anderlecht blew the title race open with a 2-0 win away at table-toppers Club Brugge. Dennis Emmanuel featured for the final 20 minutes.

Chuba Akpom: The on-loan Arsenal forward scored his fifth goal since joining Sint-Truidense who fell 3-1 away at Eupen.

Moses Simon, Samuel Kalu, and Anderson Esiti: All three Nigerians tested action but could not prevent Gent from going down 1-0 at home to RSC Charleroi.

Uche Agbo: The midfielder was in action for all 90 minutes as Standard Liege spanked KRC Gent 5-0.

Musa Muhammed and Stephen Eze:  Musa Muhammed was in action for the entire match duration as Lokomotiv Plovdiv beat Slavia Sofia 3-1 in the first league of their Europa League qualification round. Stephen Eze was on the bench after just returning from injury.

Odion Ighalo: The in-form striker could not replicate his last week’s performance as Changchun Yatai lost 2-0 away at Jiangsu Suning.

Mikel Obi: The Eagles’ captain put in a decent shift for Tianjin Teda in their 5-1 thumping of Guizhou Hengfeng.

Chidozie Awaziem: The defender was in action for 76 minutes when Nantes lost 2-0 at home to Montpellier.

Fred Friday: The attacker scored his 6th league goal of the campaign when Sparta Rotterdam fell 5-2 at home to Heracles Almelo.

Simy Nwankwo: The 25-year-old attacker was in action for all 90 minutes as Crotone fell 2-1 away at Chievo Verona.

Joel Obi: He was not listed in Torino’s 2-2 draw away at Napoli as he continues to recover from injury.

Matthew Ifeanyi, Charles Eze, and Moses Ebiye: Former junior international Matthew Ebiye was the hero for Lillestrom SK as he got the only goal in their 1-0 win at home to Sandefjord Football.

Charles Eze saw two minutes of action while Moses Ebiye was on the bench for the entire match duration.

Shuaibu Lalle Ibrahim: The attacker got a brace for Kongsvinger as they played out a 3-3 draw away at Tromsdalen.

Ahmed Musa: The Eagles’ wing wizard continued his fine form as he grabbed a brace for CSKA in their 6-0 spanking of Arsenal Tula.

Aaron Samuel, Fegor Ogude, and Brian Idowu: All three Nigerians were in action for Amkar Perm as they kept their chances of beating the drop alive with a 2-0 win away at Ural.

Hillary Gong Chukwah and Philip Azango: Both players saw action for AS Trencin as they lost 2-1 at home to MSK Zelina.

Oghenekaro Etebo and Imoh Eziekel: Etebo was on for the entire match duration while Eziekiel was withdrawn after 61 minutes as already relegated Las Palmas lost 1-0 at home to Getafe.

Brown Ideye: Ideye was in action for 45 minutes but was withdrawn at half time in Malaga’s 3-0 loss at home to Alaves. Success Isaac was confined to the bench for the entire match duration.

Chima Akas and Gbenga Arokoyo: Arokoyo came off the bench to score the winning goal for Kalmer as they saw off Dalkurd 2-1 away from home. Chima Akas was on for the entire match duration and continued to impress in his first season at Sweden.

Ogenyi Onazi, Kenneth Omeruo and Samuel Eduok: Onazi was in action for 80 minutes while Kenneth Omeruo was given a rare rest when Kaimpasa annihilated 9-man Trabzonspor 5-2, with Samel Eduok seeing only two minutes of action.

Aminu Umar: He was on for the entire match duration when Osmanlispor forced Alanyaspor to a 1-1 draw away from home.

Shehu Abdullahi, Troost-Ekong and Mikel Agu: Worrying signs for Gernot Rohr ahead of the World Cup as both Ekong and Agu failed to feature for the third consecutive match. Shehu however, continued to impress in the midfield but could not prevent 9-man Bursaspor from losing 2-1 away at Fernerbahce.

Loss to ABS: I’m not disappointed with my team- Ogbeide