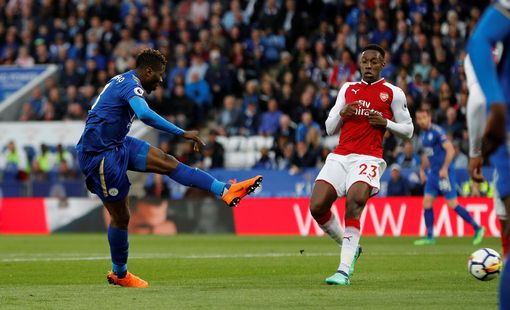 Super Eagles’ attacker Kelechi Iheanacho was on target as Leicester City beat 10-man Arsenal 3-1 at the King Power to ensure Arsene Wenger’s side remained without an away league point in 2018 and ending the Foxes six-match winless run, AOIFootball.com reports.
Leicester opened the scoring after just 14 minutes thanks to Kelechi Iheanacho’s second league goal of the season before the striker was then brought down by Konstantinos Mavropanos when he was clean through on goal. The young Greek defender was shown a straight red card by referee Graham Scott in Arsenal’s 78th sending-off in the Premier League under Wenger, only for Pierre-Emerick Aubameyang to level matters eight minutes after half-time.
However, the home team took all three points thanks to Jamie Vardy’s 76th-minute penalty – the striker’s sixth goal in seven games against Arsenal – and Riyad Mahrez’s last-minute effort.
As a result, the Foxes stay ninth in the table thanks to a first top-flight win in six matches, while Arsenal remained sixth.
Iheanacho was on for 89 minutes and had a game rating of 7.9, completing 79% of his passes, 100% of his dribbles and was fouled twice. The attacker also showed his defensive capabilities as he won 5 duels, made 2 interceptions and one tackle for the Foxes.