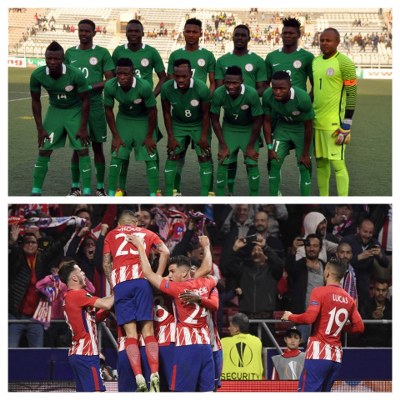 Contrary to reports that the Nigeria Football Federation offered money to Spanish LaLiga club, Atletico Madrid to play a friendly match with the Super Eagles in Nigeria, President of the NFF, Amaju Melvin Pinnick has cleared the air on the issue, explaining that the match is as a result of the existing partnership between the League Management Company (LMC) and LaLiga, AOIFootball.com reports.

Pinnick, who made the assertion on a television programme monitored by AOIFootball.com, further praised the fantastic work of 2nd Vice President Shehu Dikko, for his non-stop development of the local league in the country.

“We are not paying Atletico Madrid a dime for the match because it is a beauty of the partnership between the LMC and the LaLiga.

“Sundowns of South Africa will be paying Barcelona $4million, but in our own case, it is as a result of our partnership with the Spanish League.

“I must commend Shehu Dikko and the league body; you know we had an arrangement with them a few years ago and they have their office here and they pay taxes. In fact, I can confirm to you that we already have their land permit on the ground and they will be flying directly to Uyo for the game,” Pinnick said.

The NFF supremo further praised the league body for putting together this kind of game, insisting matches like this will help boost the image of the league further.