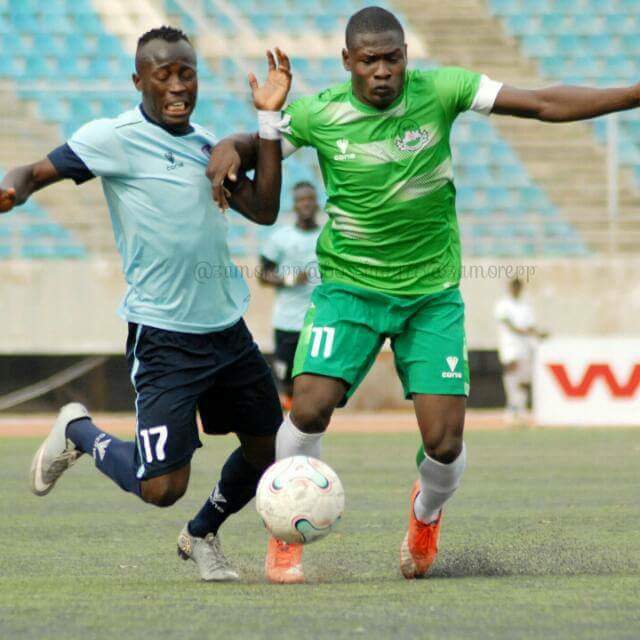 NPFL leading scorer, Junior Lokosa scored a brace and provided an assist for Pillars, while Destiny Ashadi pulled a goal back for Katsina United.

In other matches, Plateau United slipped to the third position despite outscoring Nasarawa United 2-1 in Jos.

Bature Yaro gave the Peace Boys the lead from the spot kick in the 11th minute, but Nojeem Olukokun drew level for the Solid Miners five minutes after the break, when he connected from Samuel Oyedeji’s delightful cross.

In Akure, Sunshine Stars outsmarted Heartland 2-1. Sikiru Alimi and Franklyn Sasere were on target for the Owena Waves, while Fortune Omoniwari got the Naze Millionaires the only goal to reduce the deficit.

Enugu Rangers and Akwa United battled for a stalemate draw at the Nnamdi Azikiwe Stadium.

At the Agege Stadium, Abia Warriors tamed MFM FC 1-0 to secure an away victory.

Ndifreke Effiong struck in the 52nd minute following a mix-up in MFM’s defence.

In Maiduguri, El-Kanemi Warriors and Rivers United battled to a 1-1 draw. El-Kanemi Warriors’ defender, Aghahowa Otakho diverted Bernard Ovoke’s cross into his own net in the first half stoppage time, but Michael Ohanu drew level for the hosts on the stroke of 90 minutes.

Similarly, Niger Tornadoes and Kwara United settled for a 1-1 draw at the Bako Kontagora Stadium in Minna.

Segun Alebiosu opened the scoring for the visitors, five minutes before the half-hour mark, but Eric Frimpong leveled scores for Tornadoes in the 63rd minute.

Yobe Desert Stars and FC Ifeanyi Ubah both settled for a 1-1 draw in Damaturu.

Ivorian striker, Seka Pascal had put Ifeanyi Ubah upfront in the 45th minute, only for Philip Auta to draw level for the home team three minutes from time.