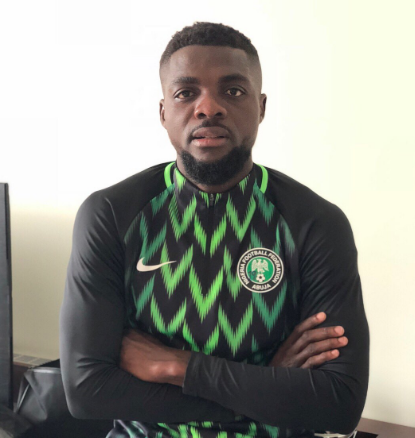 Super Eagles’ midfielder, John Ogu has said that top friendly matches are essential for teams preparing for the World Cup, as it would boost players’ mindsets, AOIFootball.com reports.

Ogu, who spoke only to AOIFootball.com, thanked God for making the 2018 World Cup Provisional list, noting that he had failed to make the cut in 2014.

“I feel really great. I thank God for all this because I remember I didn’t make the last World Cup provisional squad. So, I’m really excited and happy. It is now time to work harder to be in the 23-man team to the World Cup,” Ogu said.

The Hapoel Be’er Sheva player, who celebrated his third straight title with the club last weekend, said he had no fear except to stay fit, adding that the Eagles will not underrate any team.

“I don’t have any fear really. I just want to stay fit and focused. I don’t think we have to look down on any team because every team that has qualified to the World Cup deserve it,” Ogu said, noting that the upcoming friendly matches against DR Congo in Port Harcourt and England in London will help prepare the players better for the World Cup.

Commending Super Eagles’ manager, Gernot Rohr for the unity he has instilled in the team and the Nigeria Football Federation for their support, Ogu added that the confidence exuded by the team has improved.

“Now we are more focused on playing and the NFF on their part are doing a great job to help the team prepare well. Coach Rohr has really done well for the team. He has brought more unity and he wants to win.
I have confidence in him and I think the players do too. Everyone is working to succeed with the coach,” Ogu concluded.

Lesotho Win: I love the way my boys have fun when they play, says...