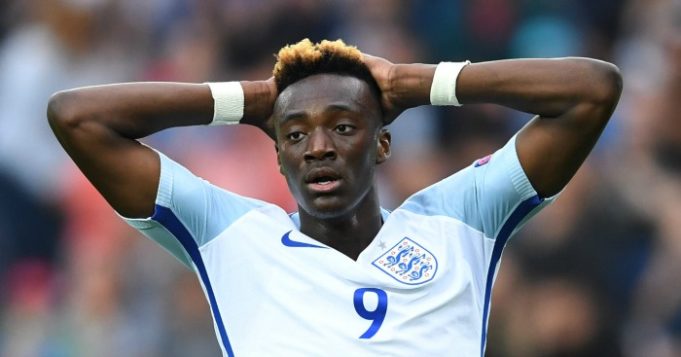 They say life sometimes does not offer every individual a second chance, that is obviously the case for Chelsea loanee, Tammy Abraham who was excluded from England’s squad that will travel to the World Cup in Russia after not being deemed good enough by current head coach Gareth Southgate, AOIFootball.com reports.

The 20-year-old striker rejected the opportunity to play for the Super Eagles of Nigeria last year despite having a meeting with NFF boss Amaju Pinnick alongside his father in the UK.

He is not even among the five players listed by Three Lions’ manager, Gareth Southgate’s on the standby list.

Abraham was rewarded with a call-up to England’s senior team few months after he turned down chances to wear Nigeria’s Green-White-Green and went on to make his full debut against World champions Germany, and then an appearance as a substitute against tournament favourites Brazil in November 2017.

However, with an uncertain summer ahead for the striker, even if Abraham had accepted the chance to play for Nigeria, he would have struggled to break into the squad with the likes of Junior Lokosa showing more consistency him in front of goal than him.

Tammy Abraham has been left out of England’s World Cup squad by Gareth Southgate. The striker will be watching the tournament in Russia from his sofa this summer,” Oluwashina Okeleji,

On his part, @Lordshuggar tweeted: “So Tammy Abraham went down with Swansea in the EPL and still didn’t make the 2018 England World Cup squad he dreamed of eh. To think he accepted to join the Super Eagles of Nigeria, only to publicly reject them again!!! The man must not be having a good time. Devil wicked Gan!”

We’re ready to die on the pitch on Saturday, says Mikel Agu

Feels great to be back on the scoring sheet, says Chukwueze