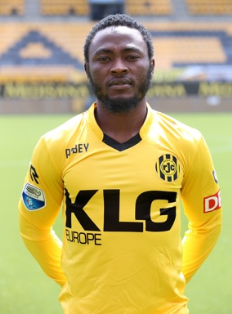 Former Flying Eagles’ star, Abdul Ajagun was on target for his Belgium Jupiler League club, Kortrijk as they thrashed Waasland Beveren 3-1 away from home, AOIFootball.com reports.
With nothing to play for both sides, Jeremy Perebet put the away side in the lead after just 34 minutes before Chelsea loanee and Ivorian midfielder Victorien Angban was shown his matching orders on the stroke of half time. Waasland went into the break one goal up.
Four minutes into the second Half, the away side doubled their lead via the boot of Ajagun as the midfielder scored his 6th league goal of the season.
Down but not out, Waasland pulled one back in the 52nd minute through Ghanaian international, Nana Opoku Ampomah before Isaac Thelim missed a golden opportunity to level matters from twelve yards.
The penalty miss did however prove costly as substitute Medjon Hoxha scored in added time to seal all three points for Ajagun and his side.