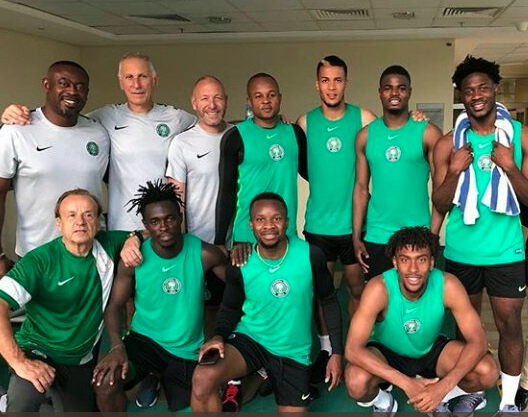 Super Eagles’ camp bubbled to life after seven players hit the training pitch on Monday evening ahead of the team’s pre-World Cup friendly against DR Congo in Port Harcourt next week, AOIFootball.com reports.

The team is however expected to receive more boost during Tuesday’s training session, when the likes of Ahmed Musa, Abdullahi Shehu, and Kenneth Omeruo, who are already in the country, join up their teammates.

The Eagles are expected to train once on Tuesday morning while they will be at the stadium later in the evening to support the Team B when they file out against Athletico Madrid at the Nest of Champions in Uyo.

Nigeria will take on DR Congo in one of their remaining three pre-world cup friendly matches before departing for Russia.

Iheanacho wanted by German side