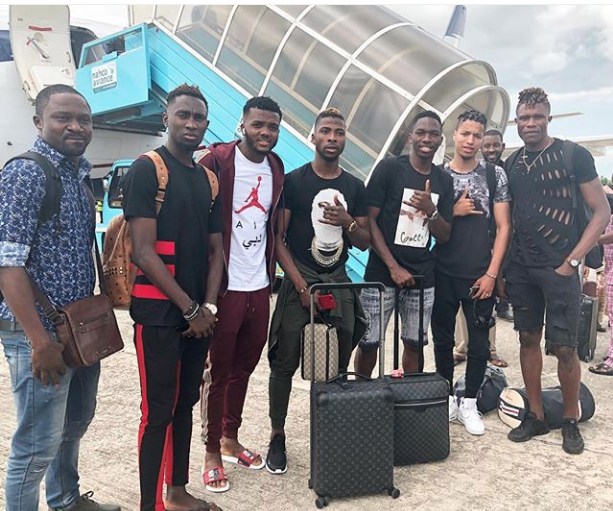 Ahead of the international friendly against the Democratic Republic of Congo, the Uyo camp of the Super Eagles’ of Nigeria has continued to swell with the arrival of Kasimpasa of Turkey defender, Kenneth Omeruo, England-based duo of Wilfred Ndidi and Alex Iheanacho and Benfica new boy Tyronne Ebuehi, AOIFootball.com can confirm.

Other players who arrived at about the same time as Omeruo and Ndidi were Portugal-based Chidozie Awaziem, Lokomotiv Plovdiv defender Stephen Eze and Plateau United safe pair of hands Dele Ajiboye. They all arrived on board an Air Peace flight from Lagos.

China-based Odion Ighalo is also expected to hit camp on Tuesday with the player already in Lagos, whilst the duo of Ahmed Musa and Abdullahi Shehu who arrived the country at the weekend, are also expected to be at the team’s Le Meridien Hotel in Uyo, ahead of Tuesday’s second training.

Coach Gernot Rohr will be hoping for a full house before Wednesday as the team intensifies preparation for next month’s World Cup warm-up game against DR Congo in Port Harcourt next week.