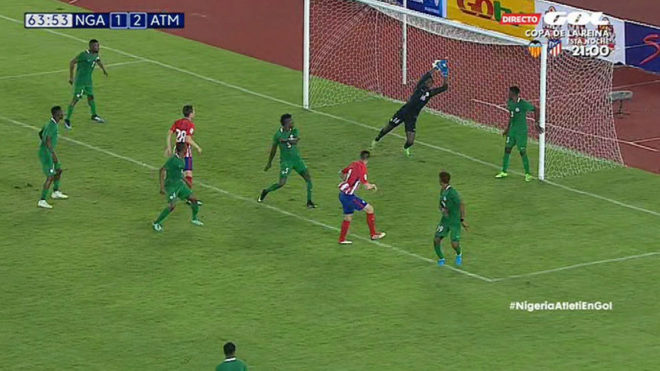 The Super Eagles’ B team put up an amazing display against Europa League champions, Atletico Madrid but fell 3-2 at the GOtv Max Cup played at the Godswill Akpabio Stadium in Uyo on Tuesday, AOIFootball.com reports.
Goals from Angel Correa, Fernando Torres, and Borja Garces denied the Salisu Yusuf-led side victory, despite scoring two top quality goals through Kelechi Nwakali and second-half substitute Usman Mohammed.
The Eagles’ started brightly with the  first chance of the encounter falling to Nigeria after captain Musa Muhammed released Kadiri who raced clear of the defence but could only shoot straight at Jan Oblak.
With half an hour gone, Arsenal loanee Kelechi Nwakali produced a moment to relish for a long period as the youngster beat an Atletico player before unleashing a long-range curler past Oblak to hand Nigeria a deserved lead.
The Super Eagles’ lead would, however, be shortlived after Emem Eduok conceded possession in his half to Thomas Partey who fed Correa. The Argentina forward toe-poked past an onrushing Olufemi Thomas as both teams went into the half level on scores.
Three minutes after the hour mark, substitute Fernando Torres was lucky at the third time of asking, as the Spain international, unmarked, connected a header to a perfectly-weighted corner kick from Correa to give the visitors the lead for the first time in the tie.
With 10 minutes left on the clock, Nigeria drew level when former Taraba United midfielder Usman Mohammed scored an amazing goal, turning the Atletico defender in an out before slotting home to draw the Eagles level on terms, with his effort revoking memories of country legend Austin Jay Jay Okocha.
However, a late strike from Garces ensured Simeone’s men ended the winner of the maiden GOtv Max Cup after he sliced an effort past Thomas with only five minutes to go.