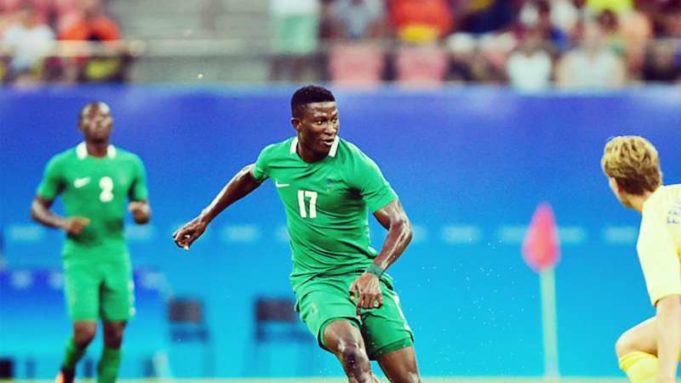 Rio 2016 bronze medalist, Usman Mohammed has expressed his delight after scoring on his first senior debut for Nigeria in the clash against Atletico Madrid, AOIFootball.com reports.

The former Taraba United midfielder, who spoke to AOIFootball.com exclusively after the game, praised the Uyo fans for their unrelenting support throughout the match.

“First of all, I want to thank God for everything; the fans who cheered us and gave us a lot of strength and motivation to carry on.

“For the goal, it is a dream come true for me and I’m so happy about it. I was confident with my abilities with the ball. I created the chance because I started the move from the midfield so I was calm in the 18-yard box and I took my time to score the goal,” Usman said.

The youngster came on as a sub to score a fantastic goal, bringing back a memory of the type scored by former Eagles’ captain Jay-Jay Okocha. He said further that he will continue to improve at club level to ensure he is considered for the national team in the future.

“I will wait for my time; it has always been my dream to play for the Super Eagles and I have been waiting for the opportunity since the Olympics in Brazil. But I believe there is a reason for everything,” Usman concluded.

Breaking: Tianjin blow as Mikel is ruled out for the remainder of the season