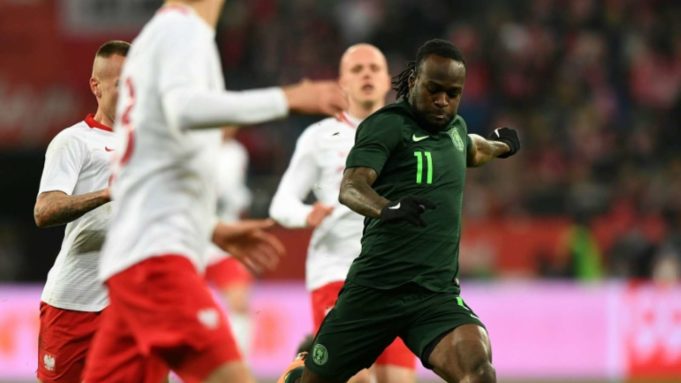 The camp of the Super Eagles bubbled on Thursday morning with the arrival of Chelsea of England star, Victor Moses who joined up with the rest of the squad ahead of their friendly date against former world champions England on Saturday, AOIFootball.com reports.

Moses, who was given days off by the technical crew after a long season which saw him clinch his first FA Cup trophy, missed the team’s pre-World Cup camp in Uyo and the game against DR Congo in Port Harcourt.

His arrival, however, brings the number of players in camp to 26 with Moses Simon due to undergo a further scan later in the day to ascertain the extent of his thigh injury.

Similarly, former Watford striker Odion Jude Ighalo has assured Nigerians of a positive outing against the Three Lions in Wembley, positing that the match will be a very tough one for both sides as they prepare for the World Cup.

The Changchun Yatai striker who spoke to the NFF media department ahead of the game said, though they will be facing a very strong England team, he believes the Eagles have what it takes to contain their hosts.

“England has a very good team and their squad comprises of top players in the Premier League. I played with them during my time in England so it’s going to be a very difficult game for both teams.

“We know it’s a friendly game but we want to try and win every game so we can try and correct our mistakes. It’s going to be a tough game but it’s very possible we come out with a victory,” Ighalo concluded.

Nigeria will be seeking her first win over England after a loss and draw in their past two fixtures. Kickoff for the game is at 5:15 pm Nigerian time at the prestigious Wembley Stadium.