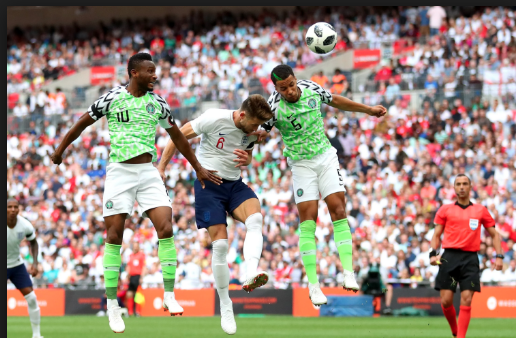 Super Eagles’ attacker Alex Iwobi made history on Saturday night as he became the first Nigeria player to score against England in a 2-1 loss to the Three Lions at a jam-packed Wembley Stadium, AOIFootball.com reports.

In a first half dominated by England, playing in their now familiar 3-5-2 formation, it was the home side who opened the scoring through an unlikely source at a sun-drenched home of football.

Kieran Trippier swung in a corner from the right for Cahill, making his first England appearance since October to rise highest and power a brilliant header into the top right-hand corner of the net, despite the presence of Ogenyi Onazi on the line.

With all eyes on Raheem Sterling after his eventful week, the Manchester City forward missed the target from a tight angle when he went through on goal just before the quarter-hour mark, before firing over the bar from just inside the box, seven minutes before the break.

The pace down the flanks of Jesse Lingard and Sterling was causing Nigeria’s back-line all kinds of problems in the first 45 minutes, with England doubling their lead after 39 minutes.

The Eagles gifted the ball straight to Eric Dier in central midfield, and he fed Kane, who in turn found Sterling on the edge of the area. The forward then laid the ball off for his captain, who beat Francis Uzoho with a fiercely-struck low drive that the Nigeria goalkeeper should have done better with.

Nigeria responded to that setback by making four substitutions at half-time, with those changes paying immediate dividends as the Super Eagles reduced the deficit within two minutes of the restart.

Iwobi’s clever pass sent Odion Ighalo through on goal and, after the former Watford striker had hit the post with a well-struck effort, the Arsenal midfielder was there to smash home the rebound for what was Nigeria’s first-ever goal against England.

It was also the first time England goalkeeper Jordan Pickford had conceded since the World Cup qualifier against Slovakia in September, but the hosts managed to keep their opponents at bay thereafter.

The Eagles continued to press for an equaliser as captain John Obi Mikel fired straight at Pickford before a late array of attack was well dealt with by the trio of Ekong, Omeruo, and Ogu who impressed in the second half.

The Eagles will next face the Czech Republic in their last warm-up game in Austria as Rohr also names his final 23-man squad next week.

Injury: Moses expected back in action