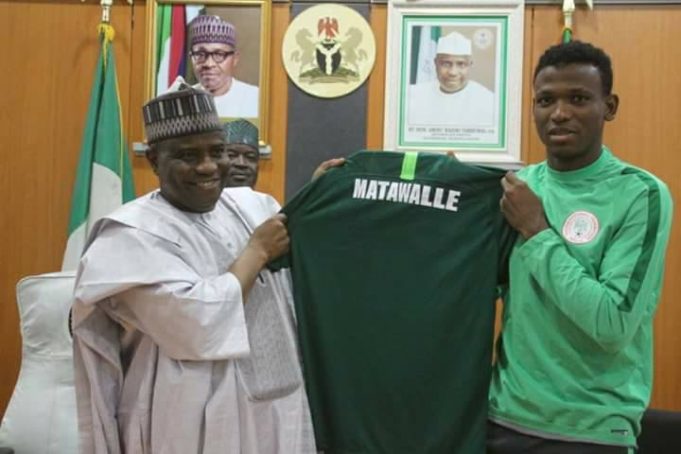 The state Governor, Aminu Waziri Tambuwal honoured Shehu with a house, a land to build his sports complex, sponsorship to Hajj and cash rewards to support the Super Eagles defender Foundation.

“I want to appreciate my Governor for this great honour; it feels so good my hard work and being a good ambassador of this state is being celebrated and recognised. I am grateful to our darling Governor for this kindness and gesture.

“This is not an honour for me to sleep off, but to work very hard at both club and national team. What interests me most is the support for my Foundation and the land to build my sports complex; we have many talents in Sokoto and we must create the enabling environment to nurture them with modern facilities” an emotional Shehu said.

“We have concluded plans to host a Charity Match in Sokoto State. The match will be between Shehu Friends and Musa Friends. Apart from the charity angle, we want to motivate the youths and give them hope; I am optimistic Sokoto will produce more football stars in years to come,” Shehu added.

The former Kano Pillars midfielder won two NPFL titles before moving abroad, where he conquered Asian football at Qadsia Sporting Club. Shehu’s amazing performance in Asia earned him a transfer to Europe in the Portuguese league after which he moved to Anorthosis Famagusta in Cyprus where he became a big star.

On January 2018, Shehu completed his two-and-a-half-year deal to Bursaspor in Turkey; he was one of the few Super Eagles players that moved during the mid-season European transfer window.

Shehu in 2017/2018 league season played a total number of 36 league games, 22 games with Anorthosis and 14 with his new club Bursaspor. He accumulated 3074 total minutes of playing time.

The Sokoto State-born player has 25 caps for the Super Eagles since he made his debut in 2015.