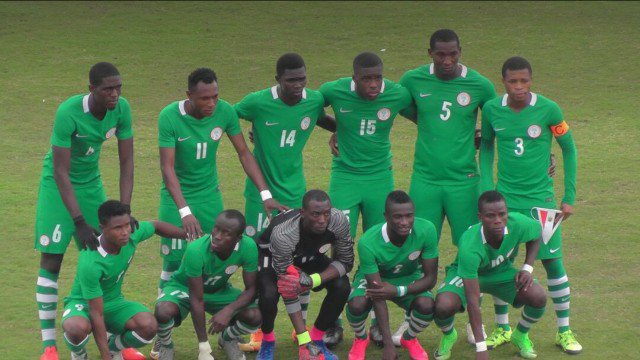 Nigeria’s U20 boys, Flying Eagles, hammered their counterparts from Mauritania 5-0 at the Agege Stadium in Lagos on Saturday to qualify for the 2019 Africa U20 Cup of Nations to be staged in Niger Republic on 6-1 aggregate.

Having missed the 2017 finals in Zambia following a home defeat to Sudan also in Lagos after winning in Khartoum, the Class of 2018 were in no mood for small measures and showed their demeanour right from kick –off, throwing everything at an equally –determined Mauritanian contingent on a damp turf in Lagos mainland.

There were early doubts the match would go ahead due to torrential downpour, but workmen somewhat made the pitch playable and the match commissioner, Sallieu Kamara from Sierra Leone gave the go –ahead for the contest.

Crunchy tackles and flying bodies were the order from kick –off as both teams showed vim and fervour. Wasiu Alalade broke the visitors’ resistance in the 12th minute with a scorching shot right inside the box that goalkeeper Amadou Fall could do nothing to stop.

Both teams fought a fierce and furious contest throughout, but at no time was there any doubt about Nigeria’s superiority, and Abubakar Ibrahim lashed a rising shot from the left that missed narrowly in the 20th minute.

Alalade would miss from a goalmouth tussle four minutes later, but Nazifi Yahaya would make no such mistake when a long punt from the Flying Eagles’ defence screened Boidiya Abdou and Mahmoud Abdallah, and left him with only the goalkeeper to beat. Just before half time, Captain Ikouwem Utin nearly made it three, but his fierce shot from the edge of the box was well read by Fall.

Yahaya made sure of the third only two minutes after the restart, heading beyond Fall from Utin’s corner kick. In the 53rdminute, Abubakar Ibrahim should have scored but shot wide from a great chance. In the 66th minute, Yahaya’s well –placed drive was diverted for a corner by Fall, and from the resultant kick, Aniekeme Okon made it four for Nigeria.

Alalade, Yahaya and Okon came close to scoring as the seven –time African champions took the game by the scruff in the latter stages, and Norway –based Afeez Aremu would put the icing on the cake in added time when he slotted past Fall from the penalty spot after Okon was badly halted in the box.

Discipline is my watchword every day, says Osimhen