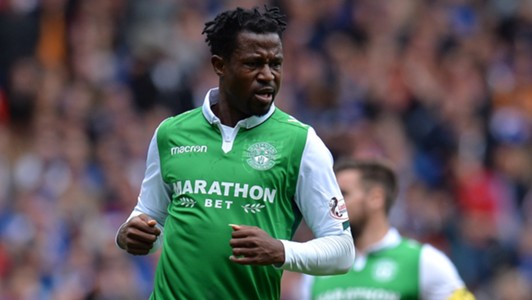 Former Super Eagles’ defender, Efe Ambrose continued from where he left off in the previous round as he helped Hibernian to a comeback victory over Asteras Tripolis, while Philip Azango also scored the match winner for As Trencin, AOIFootball.com reports.

Akinola Akinyemi was however on the losing side as he fired blanks for the first time in five outings for Ventspils.

AOIFootball.com takes you through the performances of some Nigerian players in the 1st leg second round qualifiers of the UEFA Europa League.

Efe Ambrose: He started the comeback for Hibernian when he headed in a 64th minute corner to help his side recover from two goals down as they ran out 3-2 winners in Edinburgh.

Philip Azango: The attacker scored the only goal of the clash to help As Trencin earn an impressive 1-0 victory away in Poland to Gorniz Zabrze.

Akinola Adeleke, Abdullahi Alfa and Tosin Aiyegun: All three Nigerians were in action for the entire match duration as French side Bordeaux pipped FK Ventspils 1-0 away from home.

Sylvester Igbonu: The former Eagles’ star was in action for all 90 minutes as FK UFA drew goalless at home to ND Domzale

Rabiu Ibrahim and Alfred Effiong: The former Super Eagles’ midfielder was on for 72 minutes for Slovan Bratislava but it was Alfred Effiong who came off the bench to inspire Blavan and help setup the winning goal for Uros Ljubomirac. Blavan won the clash 2-1.

Ezekiel Henty and Umar Sadiq: Ezekiel Henty was expected to cause trouble for Steven Gerrard’s Rangers but the striker fired blanks for NK Osijeka with Rangers earning the advantage going into the second leg with a 1-0 victory.

Umar Sadiq was not dressed for the clash.