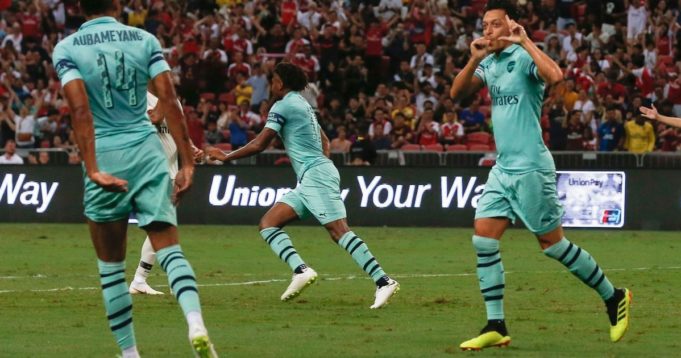 Super Eagles’ winger, Alex Iwobi returned to action for the first time under new manager, Unai Emery as the Gunners brushed aside a very youthful Paris Saint-Germain side in Singapore, AOIFootball.com reports.

Iwobi who is due to sign a new £70,000/week five-years contract started on the left-hand side of an attacking trio alongside Mesut Ozil and Henrikh Mkhitaryan, and he showed flashes of why Emery was keen to tie him down to a long time contract.

The attacker was however withdrawn at halftime for Alexandre Lacazette with the gunners leading 1-0 courtesy of an Ozil strike as the coach opted for a different pattern going into the second half.

Further strikes from Lacazette(2), Rob Holding and Edward Nketiah ensured the Gunners rounded up their tour of Singapore in style after losing to Atletico Madrid on penalties earlier in the week.

English Championship Round Up: Etebo, Ajayi on target; Mikel impresses