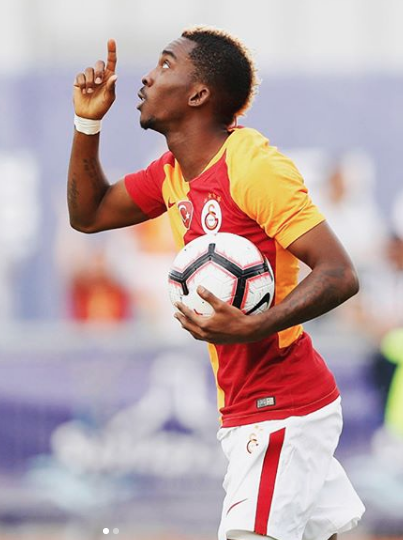 It was a moment of joy for some Nigerians who got their names on the score sheet across Europe, with the likes of Shuaibu Lalle Ibrahim and Adeleke Akinola continuing their impressive form whilst Iheanacho showed Leicester City a glimpse of what to expect in the new season.

AOIFootball.com takes you through their performances as the new European season begins take its shape.

Victor Moses: The Eagles’ winger returned to action for the first time under new manager, Maurizio Sarri. He converted a penalty to help Chelsea to 1-1 (5-4 pen) win over Inter Milan at the International Champions Cup.

Alex Iwobi: The Gunners’ attacker was on for 45 minutes under new manager Unai Emery when Arsenal brushed aside a youthful PSG side, 5-1.

Kelechi Iheanacho, Wilfred Ndidi and Ahmed Musa: All three Nigerians returned to action for the first time following their participation at the World Cup but it was Iheanacho who grabbed the headlines after scoring a late consolation for Leicester City in their 2-1 loss to Udinese.

Seyi Ojo: The 21-year-old forward was on target for Liverpool when he converted from 12-yards as the     Reds made light work of Manchester United, thrashing them 4-1 at the ICC Cup in the USA.

Abdul Ajagun: The former Flying Eagles star was introduced in the 67th minute but could not stop KV Kortrijk from losing 4-1 at home to Anderlecht.

Emmanuel Dennis: The striker was rooted to the bench for the entire 90 minutes as Club Brugge began their season with an impressive 5-2 bashing of KAS Eupen.

Moses Simon, Taiwo Awoniyi, Samuel Kalu, Anderson Esiti and Uche Agbo: Uche Agbo started his first game of the season as Standard Liege edged out Gent 3-2, with both Awoniyi and Esiti featuring whilst Moses and Kalu were missing through injury.

Mikel Obi: The Super Eagles’ captain was missing in action as Tianjin Teda returned to winning ways with a hard-fought 3-2 victory away at Dalian Yifang.

Odion Ighalo: The Changchun captain was on for the entire match duration but could not stop the team from losing 2-0 away at Tianjin Quanjian.

Paul Onuachu and Frank Onyeka: Both Nigerians were on parade for FC Midtjylland but it was Onyeka who stole the show to score his first goal of the season, putting the cherry on the cake in his side’s 3-1 win at home to Esbjerg FB.

John Ogu and Anthony Nwakaeme: Both players were in action as Hapoel Be’er Sheva lost the Israeli Super Cup via penalties to Hapoel Haifa after regulation time had ended 1-1.

Adeleke Akinola, Abdullahi Alfa and Tosin Aiyegun: 19-year-old Akinola was on hand to score his 13th league goal of the season as he netted the third for FK Ventspils in their 3-0 win away at FK Jelgava.

Abdullahi Alfa was introduced in the 62nd minute while Tosin was on for the entire match duration.

Shuaibu Lalle Ibrahim: The attacker scored a hat-trick for Division 1 side Kongsvinger in their 6-2 thumping of Strommen IF.

Uche Ikpeazu: The 23-year-old striker got a brace for new club Heart of Midlothian as they trashed Inverness 5-0 in the Scottish League Cup.

Umar Sadiq: The on-loan Roma forward made his debut for Glasgow Rangers in their 3-0 thrashing of Wigan Athletic in a preseason friendly match.

Philip Azango and Abdul Musa Zbairu: Both players saw 90 and 83 minutes respectively as 9-man AS Trencin were thrashed 4-1 by visiting MFK Ruzomberok.

Chima Akas and Gbenga Arokoyo: Akas was on for the entire match duration but could not prevent Kalmer FF from losing 1-0 away at AIK; Gbenga Arokoyo was not listed for the clash.

Alhaji Gero: The former Enugu Rangers attacker was in action for 82 minutes to help Ostersunds Fk to a hard-fought 1-0 victory over IF Elfsborg.

Chisom Egbuchulam: The former Enugu Rangers attacker was on for 86 minutes as he helped Falkenbergs FF to a comfortable 3-0 win away at Varbergs Bois.

Stephen Odey: He scored his first goal of the season as FC Zurich beat local rival Grasshopper Club Zurich 2-0 away from home.

Noah Okafor: The youngster scored his first professional goal for Basel in what was his second game for the club as they drew 1-1 away at Neuchatel Xamax.

Henry Onyekuru: The Eagles’ attacker got the all-important goal to help Galatasaray to a hard-fought 1-0 win in a friendly match against Club Africain.