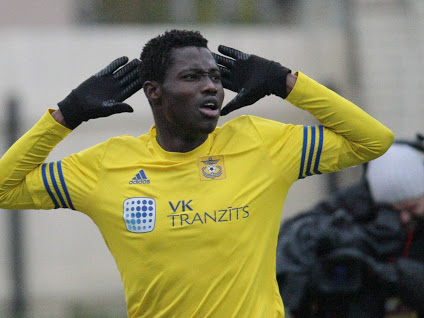 Akinola, who has been earning rave reviews of late, was pictured having a conversation with Rohr after his side’s 2-1 loss which he scored in, alongside fellow Nigerians Abdullahi Alfa and Tosin Aiyegun, with reports that Rohr could fancy giving the 19-year-old a chance for next month’s clash against Seychelles.

Akinola joined Ventspils in 2017 and scored 10 goals in his debut season; he has however doubled that amount this season netting 20 goals (13 league, 7 Europa) in just 19 matches, making him the country’s most in-form striker.

The Super Eagles will resume the quest to reach the 2019 AFCON championship with a date against Seychelles on September 7.