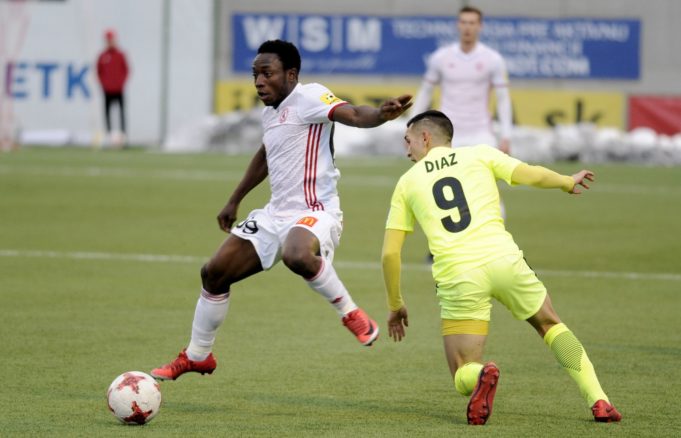 After getting the match winner for his side in their first leg clash, Philip Azango was again on target for AS Trencin, progressing them to the final qualifying rounds whilst Akinyemi’s goal was not enough to lift FK Ventspils which ended their European journey gallantly.

AOIFootball.com takes you through the performances of some Nigerian players in the 2nd leg second round qualifiers of the UEFA Europa League, with a possible national team call-up for a young star.

Efe Ambrose: The former Super Eagles’ defender was on for the entire match duration in Hibernian’s drew 1-1 away at Asteras Tripoli’s thus qualifying on a 4-3 aggregate.

Philip Azango: The attacker scored his side’s third goal when they thrashed Gornik Zabrze 4-1, thus progressing on a 5-1 aggregate.

Akinola Adeleke, Abdullahi Alfa and Tosin Aiyegun: 19-year-old Akinyemi Akinola might have just shot himself into the national team setup after scoring in his side’s 2-1 loss to Bordeaux.
The Ventspils star impressed on the night in a match that had Super Eagles’ Coach Gernot Rohr in attendance. Abdullahi Alfa and Tosin Aiyegun were also in action.

Sylvester Igboun and Kehinde Fatai: Igbohun was on for the entire match whilst Fatai was subbed off after 69 minutes as FK UFA drew 1-1 away NK Domzale.

Yusuf Odubanjo, Matthew Ifeanyi and Moses Ebiye: Odubanjo was introduced in the 73rd minute for Lask Linz as they defeated Lillestrom 2-1 away from home with Matthew Ifeanyi featuring for all 90 minutes.

Ndidi happy with Leicester City’s first win of the season