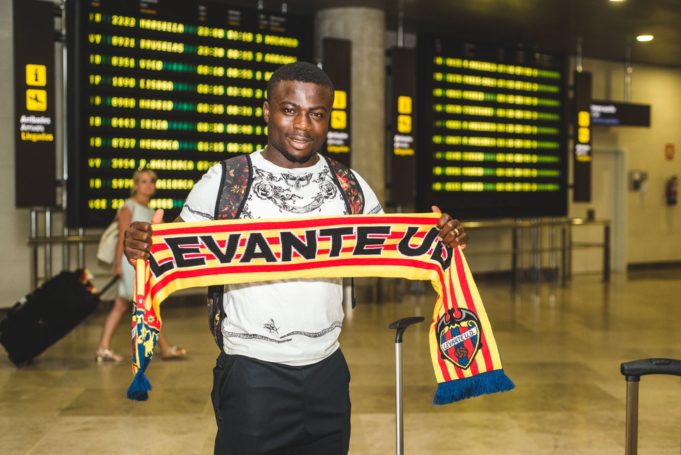 Super Eagles’ winger, Moses Simon has received praises from his former club KAA Gent, after completing a move to Spanish LaLiga side, UD Levante for a reported fee of around €4 million and a5-year deal, AOIFootball.com reports.

The club wasted no time to express their profound gratitude for the pacey winger on their official website, saying he will always remain a part of their history.

“He leaves the club with his head up and will forever belong to the select group of players who won the first league title in the club’s history and then became part of a historic Champions League campaign stamped in the collective Belgian football memory.

“The following season, he was also a member of the group of players that won Tottenham at Wembley in the Europa League.

“Immediately after his transfer from Trencin, he was the only player who spoke openly about winning the title “with the help of God”. It turned out to be prophetic words.

“During his time at the Buffalo’s, he was feared for his vicious dribbles, his incredible speed and his hard shot and loved because of his cheerful personality and his generous smile. He was often the author of important goals, like last season when he scored the only goal in the penultimate match of the playoffs in the 1-0 victory against Anderlecht.

“KAA Gent congratulates Moses on his move to Levante and thanks him for the beautiful and successful years that he experienced here with us. Once a Buffalo, always a Buffalo,” the club wrote on their website.