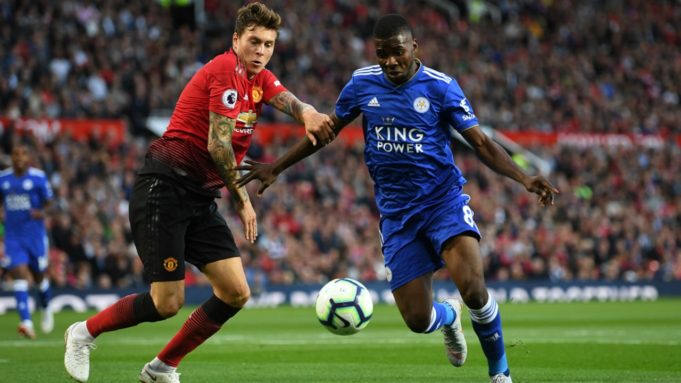 Super Eagles’ forward, Kelechi Iheanacho could not replicate is preseason form as he struggled in front of goal in Leicester City’s 2-1 loss to Manchester United on the opening day of the EPL season, AOIFootball.com reports.

The Nigerian, who was backed by Leicester boss Claude Puel to lead the attack line, struggled to make any meaningful impact in the match, failing to register a single shot in the clash.

Paul Pogba and Luke Shaw however scored in each half for the hosts whilst substitute, Jamie Vardy got a late consolation for the visitors, heading in from close range, with United withstanding a late onslaught to secure their first win of the season.

Iheanacho was on for the entire match duration and had a game rating of 6.1, failing to register a single shot on target, completed 95% of his passes, won just one duel and was dispossessed 4 times.

Wilfred Ndidi on the other hand, had a better performance on the night with a game rating of 6.9, completing 83% of his passes, winning 5 duels, whilst also making one clearance and 2 interceptions.