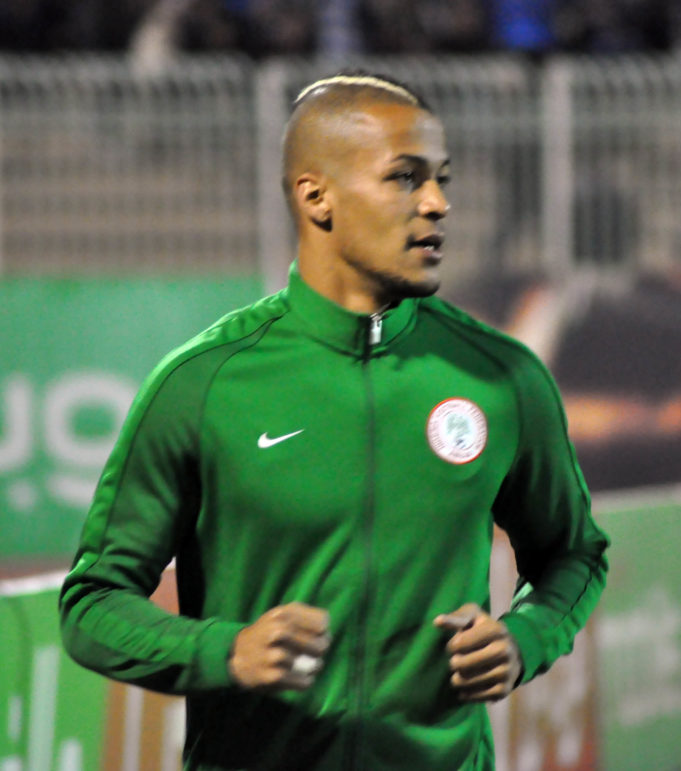 It was mixed performances for Nigerian players on the opening day of the Premier League with most settling for substitute appearances.

Super Eagles’ defence Trojan, Troost-Ekong, on the other hand, began the new Turkish season with a bang.

AOIFootball.com reviews their performances as the 2019 AFCON qualifiers against Seychelles draws nigh.

Victor Moses: The Eagles’ winger came in for Pedro with 9 minutes of normal time left as Chelsea began the Premier League season with a convincing 3-0 defeat of Huddersfield.

Alex Iwobi: The Gunners’ forward was confined to the bench for the entire match duration when Arsenal lost 2-0 at home to Manchester City on Unai Emery’s opening day as Arsenal Coach.

Kelechi Iheanacho and Wilfred Ndidi: Both players were on parade for 90 minutes when Leicester City began their EPL campaign with a slim 2-1 loss away at Manchester United.

Success Isaac and Leon Balogun: The Hornets’ number 10 was introduced after 74 minutes for Andrey Gray when Watford defeated Brighton & Hove Albion 2-0. Leon Balogun was on the bench for the visitors.

Oghenekharo Etebo: The midfielder came off the bench after the hour mark for Bojan Krkic in Stoke City’s 1-1 draw at home to Brentford.

Eberechi Eze and Bright Osayi-Samuel: Though they lost 2-1 at home to Sheffield Wednesday, Eze scored his first goal of the season for QPR, whilst Osayi-Samuel was introduced at halftime.

Xavier Amaechi: The youngster scored one and help set up another when Arsenal’s U-23 lost 6-5 to Manchester City in the Premier League 2, Division 1 clash.

Abdul Ajagun and Emmanuel Dennis:  Ajagun was on for 86 minutes but was unable to prevent KV Kortrijk from losing 3-0 away at Club Brugge with Emmanuel Dennis featuring for just 10 minutes for the hosts.

Taiwo Awoniyi and Anderson Esiti:  Awoniyi was on for 74 minutes when Gent defeated Waasland Beveren 4-1. Anderson was not listed as he continued to attract offers from other clubs.

Uche Agbo: The midfielder saw 73 minutes of action for Standard Liege when they drew goalless at home to Cercle Brugge.

Stephen Eze: The lanky defender was in action for the entire match duration as Lokomotiv Plovdiv made it back to back wins, defeating FC Vereya 3-0.

Mikel Obi: The Super Eagles’ skipper was yet again missing in action due to injury when Tianjin Teda defeated Henan Jianye 2-0.

Eziekel Henty: The striker made it three in three after scoring in NK Osijek’s 3-0 defeat of NK Istra.

Peter Olayinka: The striker was introduced just on the hour mark but could not replicate his debut heroics for Slavia Praha which earned an impressive 1-0 victory away at Mlada Boleslav.

Paul Onuachu and Frank Onyeka: Onuachu bagged an assist for FC Midtjylland when they defeated Horsens 3-0, with compatriot Frank Onyeka rooted to the bench for the entire match duration.

Taye Taiwo: The former Eagles’ left-back was in action for Rops Rovaniemi when they defeated IFK Mariehamn 1-0 in the Finnish Veikkausliiga.

Shuaibu Lalle Ibrahim: Lalle was in action for 86 minutes when his side Kongsvinger lost 3-1 away at Hamkam.

Chidozie Awaziem: The Eagles’ defender was on the bench for the entire match when FC Porto began their season in a high, thumping GD Chaves, 5-0.

Kelechi Nwakali and Yahaya Muhammad: Both players were on parade when FC Porto B began their season with a 4-0 loss away at Estoril Praia.

Uche Ikpeazu: The 23-year-old striker was in form and helped set up the winning goal when Heart stunned league champions Celtic 1-0.

Umar Sadiq: The on-loan Roma forward came off the bench in the 77th minute to make his league debut for Rangers in their 2-0 win over St. Mirren.

Efe Ambrose: The former Eagles’ defender was on for the entire match duration when Hibernian drew 1-1 away at St. Johnstone.

Philip Azango, Emeka Umeh, and Abdul Musa Zubairu: All three Nigerians were on parade when As Trencin defeated MSK Zilina 3-2, with Umeh grabbing an assist.

Moses Ogbu: The attacker scored his fourth goal of the season to help Ik Sirius to a 3-2 victory away at IFK Goteborg.

Chima Akas:  The Eagles’ left-back was in action for the entire match duration but could not help Kalmer FF to victory as they lost 2-0 away at Ostersunds.

Stephen Odey: The former MFM striker was subbed off just after the half-hour mark with a suspected injury during FC Zurich’s goalless draw with St. Gallen.

Blessing Chibuike Eleke: The striker was on for the entire match during FC Luzern’s 3-2 loss at home to Young Boys.

William Troost-Ekong: The Eagles’ defender was on target for Bursaspor but they lost 2-1 away at Fenerbahce.

Henry Onyekuru: He made an impressive start to life in Turkey during Galatasaray’s 3-1 victory away at Ankaragucu.

Ogenyi Onazi: The Eagles’ vice-captain picked up a yellow card in Trabzonspor’s 2-0 loss away at Istanbul Basasehir. He was on for the entire match duration.