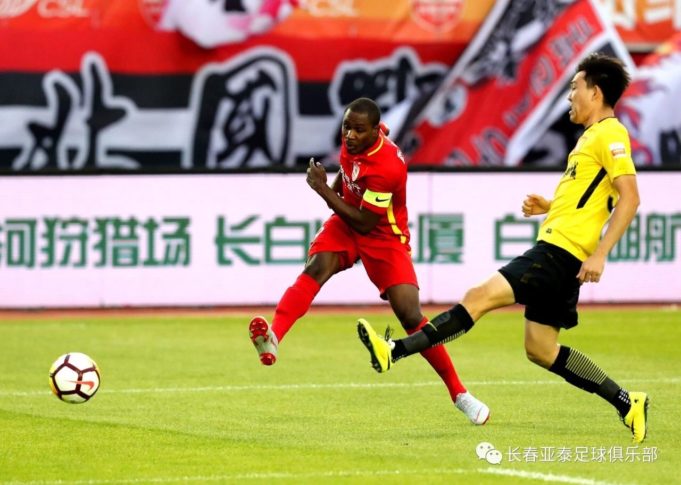 Super Eagles’ striker, Odion Jude Ighalo continued his mesmerising form in front of goal as he netted his 13th and 14th goal of the season to help Changchun Yatai to a 3-1 comeback victory away at Beijing Renhe, AOIFootball.com reports.
The in- form striker, who led his team out for the 18th Chinese Super League game, spearheaded the attack as they fell behind after just three minutes when Cameroonian Benjamin Moukandjo put the hosts in front.
Changchun however equalised fourteen minutes later when Dadi Zhou drew them level before an individual effort from Nigeria’s Ighalo, five minutes before the half hour mark put the away side 2-1 up, a lead they held going into the half time break.
Both sides came out smoking in the second half but it was Changchun who had the last laugh when Ighalo stepped up to score from 12 yards in the 84th minute after Nizamdin was shown a red card for a professional handball in the box.
With his brace against Renhe, Ighalo has now scored 14 league goals this term, putting him joint second alongside Eran Zhavi with Shanghai SIPG Lei Wu still leading the pack with 16 goals after 18 round of matches.
Ighalo was on for the entire match duration and he received the man of the match accolade with a game rating of 8.5, scoring from two of his three shots fired, whilst also completing a pass accuracy of 79%.
The victory further moves Yatai away from the relegation zone as they are now  8th on the log with 24 points from 18 games.